The Dax retreated in European trade, failing to continue the global rally on the back of healthy corporate earnings and growing confidence in the expected resumption of Russian gas supply to Europe, easing fears of a regional energy crisis.

Russian gas flows via the Nord Stream 1 pipeline are likely to restart on time on Thursday after the completion of scheduled maintenance, Reuters reported citing sources, easing investors' concerns about gas supply to Europe.Still, gains are likely to be limited as investors await Thursday’s important European Central Bank meeting, which is widely expected to result in the central bank’s first interest rate hike since 2011.

Uniper, Germany's largest importer of Russian gas, is losing cash daily as it is forced to buy supplies at much higher prices from alternative sources because Gazpromhas reduced deliveries.Uniper could be allowed to pass on some of its higher gas costs to consumers under the terms of a rescue package being discussed with the German government, sources told Reuters on Wednesday. This stands to only increase the cost of living among Germans who like many other citizens globally are feeling the pinch of rising prices. 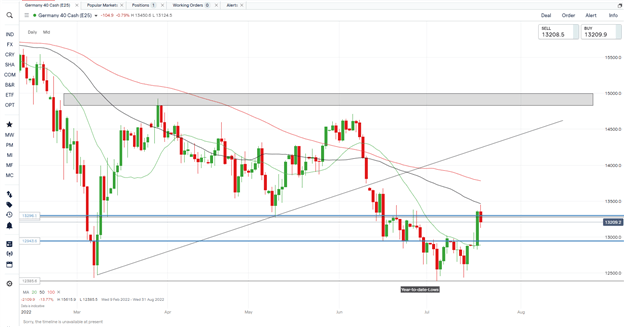 From a technical perspective, Yesterday saw a bullish push and daily candle close above the key psychological 13000 level as well as the previous resistance area around 13300. Gains were capped as we tapped into the 50-SMA (simple moving average) this morning and currently trade between the 20-SMA and 50-SMA. Any retest of the psychological level or the 20-SMA would be ideal for would-be-buyers to get involved.

The blue-chip index rose in early European trade with miners and oil majors driving London’s benchmark index to a three-week high of 7350. We have since surrendered early session gains and trade flat heading into the US session. It came as UK inflation soared to 9.4% in the 12 months to June, up from 9.1% in May, and slightly ahead of expectations thanks to rising prices for motor fuels and food. Victoria Scholar, head of investment at Interactive Investor said, “With price levels in the UK spiraling out of control and wages struggling to keep apace, the biggest risk right now is that the Bank of England fails to act aggressively enough, and inflation becomes entrenched.”

With the higher-than-expected Inflation print adding pressure to the Bank of England (BOE) It looks likely the central bank could carry out a 50-basis point hike at its next meeting in August, which would be the largest increase since 1995. Bank of England governor Andrew Bailey yesterday confirmed that a half-point increase in interest rates was “on the table” for next month, as the central bank considers toughening its anti-inflation stance.

The biggest drivers on London’s benchmark index were miners and oil majors such as Shell, BP and Rio Tinto all posting gains. 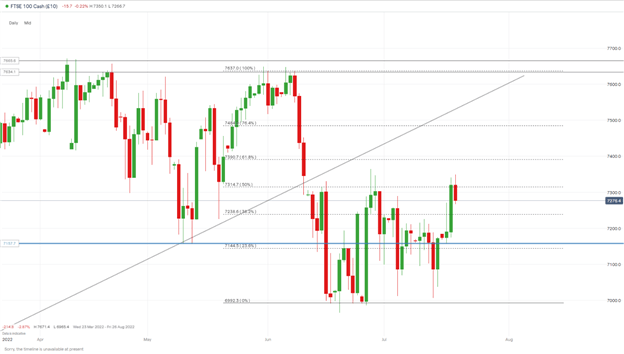 The FTSE continued its march higher yesterday to post three-week highs while at the same time breaking through some key levels. We have finally broken above the top end of the range we began on the 10th June, with a daily candle close above the 50% fib level. Given such a bullish move we have seen some pullback in the European session with a potential retest of the 38.2% fib level which should provide support before pushing higher. A break and candle close below the 23.6% fib level will invalidate any potential buy opportunities.

The Dow fell in premarket trade as the fragile sentiment sparked a reversal in haven assets. The risk of a global downturn and Europe’s energy crisis doused optimism about the US earnings season and confidence the Federal Reserve will avoid very aggressive monetary tightening. The latest monthly fund manager survey by Bank of America indicated that investors have slashed their exposure to risk assets to levels not seen even during the global financial crisis, with global growth and profit expectations sinking to all-time lows.This suggests the market is in full capitulation mode, potentially setting up a buying opportunity, according to the report.

In premarket Netflix added about 6% after it reported better-than-feared earnings late on Tuesday and said it expects to return to subscriber growth before the end of the year.A slew of earnings is left to come this week from a wide range of companies, including Teslaon Wednesday, with investors wondering what executives will say about the outlook moving into the second half of the year.

From a technical perspective, yesterday saw a bullish close that confirmed the break of the trendline, the daily candle closing on the 61.8% fib level. We might see some retracement with a retest of the 50% fib level around the 31500area providing the best opportunity for would-be-buyers to get involved. Given the bullish nature of yesterday’s candle close, we should see a further push higher.