A popular gauge of U.S. consumer attitudes worsened more than expected this month as relentless and broadening price pressures on goods and services continued to erode purchasing power and batter personal finances, leaving Americans feeling increasingly pessimistic about economic conditions in the country.

According to the Conference Board, consumer confidence fell to 98.7 in June from a downwardly revised figure of 103.2 in May, reaching its lowest level since February 2021, a worrisome sign for an economy powered by household consumption. In terms of forecasts, economists polled by Bloomberg News had projected the headline index to slide to 100.4.

Delving deeper into today's survey results, the present situation indicator, based on the current business and labor market outlook, declined modestly to 147.1 from 147.4 last month, possibly on perceptions that hiring conditions are deteriorating in the economy.

Elsewhere, the expectations index, which tracks the short-term outlook for personal finances, the business environment, and the employment backdrop, plunged to 66.4 from 73.7, its worst reading in nearly a decade, signaling slower growth for the second quarter and an increasing risk of recession by the end of the year. Purchasing intentions for cars, homes, major appliances held largely steady, but intentions have been falling rapidly since the start of 2022, reinforcing the view that the consumer is cutting back on spending plans amid mounting headwinds. 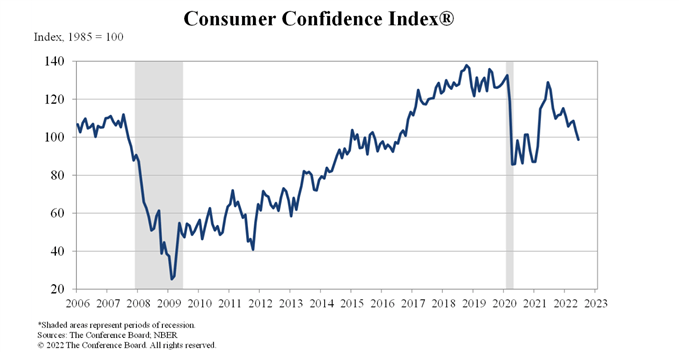 The slump in consumer confidence is cause for concern considering that household consumption accounts for roughly two-thirds of U.S. GDP. Inflation, which is at four-decade highs, coupled with the rising interest rate rates, appears to be keeping sentiment on a downward path, raising downside risks to the growth profile. Although U.S. families have drawn on excess savings and borrowed to make ends meet in the face of soaring living costs and falling real incomes, the situation may prove unsustainable in the long term, complicating the prospects for a meaningful recovery later in the year.

The S&P 500 trimmed some gains after the consumer confidence report crossed the wires, but managed to remain in positive territory as traders had already braced for a bad print following the disastrous University of Michigan sentiment survey. In any case, deteriorating consumer sentiment bodes poorly for the economy and will increase the "hard landing" narrative in the near term, creating a negative environment for risk assets and the S&P 500. 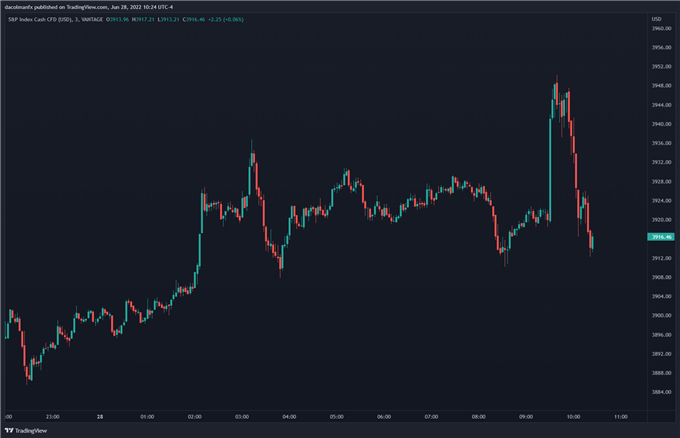