US Dollar Price Action: Is The US Dollar Peaking?

After a subdued start to the week following yesterday’s US holiday, the USD is softer across the board this morning, dipping below the 104 as the Euro bounces back from the 1.05 handle, while GBP breaches 1.23. Now while the USD will benefit from safe-haven flows, with equities beginning to stabilise there is a risk that the USD can continue to drift lower as factors that have underpinned the greenback are beginning to ease.

Following last week’s surprise hike from the SNB, I believe we are starting to shift from monetary policy divergence, which had been a supportive factor for the US Dollar to monetary policy convergence. Aside from the SNB, the ECB will raise rates from next month, while also looking to announce an anti-fragmentation tool. Elsewhere, the RBA, RBNZ and BoC have moved aggressively, meanwhile, the Bank of England have signalled their willingness to act more forcefully (despite their tepid action). The view of monetary policy covergence weighing on the greenback would be even more apparent if the BoJ broke away from its ultra-loose policy and while we aren’t there yet, Japanese Officials have signalled their unease at the rapid depreciation in the Japanese Yen.

Tighter Bond Spreads to Pressure the US Dollar 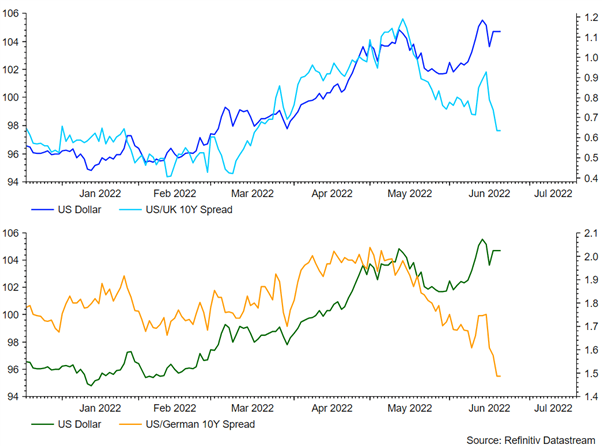 Looking ahead, among the key risk events will be the testimony from Fed Chair Powell. However, following last week’s leak to the WSJ to pre-warn markets about a 75bps two days before the Fed meeting (during the blackout period) following recent inflation figures, I would argue it would be better to follow the data over Fed speak. That being said, the Fed Chair is likely to reiterate his hawkish message.

Elsewhere, the final U. of Michigan inflation expectations survey scheduled on Friday will have increased in importance following Chair Powell’s explicit mention of the data at his most recent press conference.

“So the preliminary Michigan reading, it's a preliminary reading, it might be revised, nonetheless it was quite eye catching and we noticed that. We also noticed that the Index of Common Inflation Expectations at the Board has moved up after being pretty flat for a long time, so we're watching that and we're thinking this is something we need to take seriously. And that is one of the factors as I mentioned. One of the factors in our deciding to move ahead with 75 basis points today was what we saw in inflation expectations”

The Bank of England’s most recent policy meeting saw the MPC change their forward guidance yet again, which in turn could see a change in the Pound’s reaction to tomorrow’s CPI report. The MPC have now slightly toughened their stance on hiking, noting that they will “ACT MORE FORCEFULLY” should inflation pressures prove more persistent, as opposed to previously stating that some further tightening MAY be appropriate. Therefore, perhaps we see the Pound actually rise in the event that inflation rises above expectations.

December 16th: Some modest tightening of monetary policy over the forecast period is likely to be necessary to meet the 2% inflation target sustainably

March 16th: Some further modest tightening in monetary policy may be appropriate in the coming months