Most Read: Fed Raises Rates by 75 Basis Points in Largest Hike Since 1994 in Effort to Crush Inflation

The Bank of England raised its key interest rate by 25 basis points to 1.25% at the conclusion of its June monetary policy meeting, in line with market expectations. Today’s move represents the fifth straight hike delivered by BoE in its effort to blunt sky-high inflation in the economy, which is running at its fastest pace since the early 1980s. For context, annual CPI has continued to accelerate in recent months, reaching 9% in April, driven by, among other things, soaring energy costs.

Although price pressures may ease in 2023, the light at the end of the tunnel is not yet visible, with the central bank expecting CPI to exceed 11% in the fall before downshifting in late in the winter. Sterling's weakness is not making the situation any easier for policymakers. Earlier this week, the British currency hit its lowest level against the U.S. dollar in more than two years, accumulating a 5% drop in June and raising fears that exchange rate pass-through depreciation could reinforce inflationary forces, considering that the UK is a net energy importer.

While the inflation profile has deteriorated, BoE has been unable to meet the moment with a front-loaded policy response similar to those delivered by the Fed o BoC, constrained by rapidly slowing economic activity and growing recession risks. For this reason, the central bank has kept a steady hand, raising borrowing costs in small increments to avoid adding unneeded stress to an economy in an already precarious place following Russia’s invasion of Ukraine.

According to the communiqué, the MPC voted 6-3 to raise rates by 25 bps. The three members in the minority supported lifting borrowing costs by half a percentage point to 1.50%. This compares to a 6-3 similar vote in May, a sign that there isn't growing momentum among policymakers to go bigger and embrace a more hawkish policy stance despite red-hot inflation.

The statement took a downbeat tone on economic activity, indicating that second quarter GDP is likely to fall by 0.3%, a weaker than anticipated reading.

On the inflation front, BoE said that CPI is expected to rise slightly above 11% and that the risks to the CPI projection are skewed to the upside.

On monetary policy, the language changed compared to the previous statement, with policymakers dropping the hiking bias that noted that "some degree of further tightening may still be appropriate in the coming months". This time, the MPC used a softer message and said that "the scale, pace and timing of any further increases in rates will reflect the Committee’s assessment of the economic outlook and inflationary pressures".

Immediately after BoE's decision crossed the wires, GBP/USD took a turn to the downside, falling as low as 1.2041 before recovering some ground. It appears that traders are not convinced that the central bank will deliver a hawkish response to soaring price pressures in the economy. 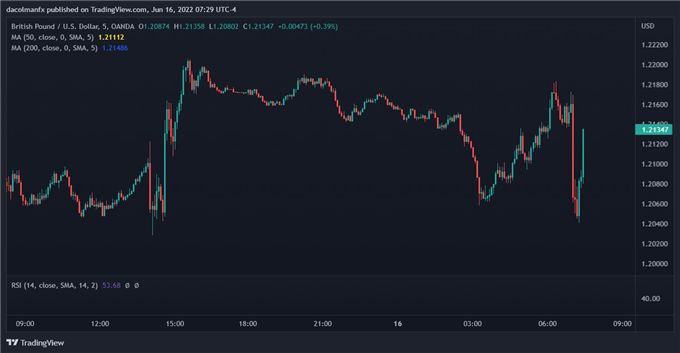