FTSE on Track for Second Successive Weekly Decline, BoE Ahead

The FTSE 100 Index is on track for a second successive weekly decline as the market looks ahead to a further rate hike when the Bank of England (BoE) meets again next week. All sectors trade in the red on Friday morning with real estate and energy accounting for the largest sector declines. 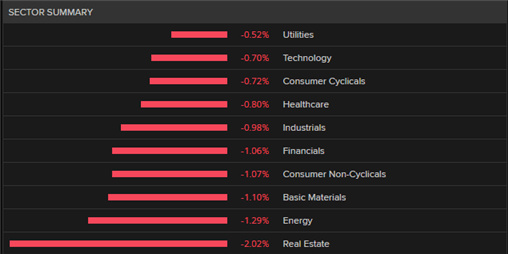 Higher anticipated mortgage rates are likely to see a drop off in mortgage applications and approvals, ultimately leading to a softer housing market down the line. Energy stocks struggle despite oil trading largely higher after a successful bullish continuation. Energy companies that have benefitted from elevated oil prices are subject to the special windfall tax which will be used to offset rising energy costs for lower income households across the UK.

UK and European markets moved sharply lower as rate hikes in the UK and EU look set for upcoming meetings. In addition, news out of Shanghai of another lockdown this weekend for mass testing adds to concern for equity markets. 14 out of Shanghai’s 16 districts are to be locked down for community testing as around 151 new coronavirus cases emerged on June the 9th. Some fear that the lockdown could be extended pat the weekend, having ramifications for not only the local economy but global risk sentiment as well.

Next week the BoE is poised to raise interest rates with 25 basis points most likely to be the case despite implied probabilities from interest rate swaps pricing in around 32 bps worth of tightening. A potential hawkish disappointment (i.e. a 25 bps hike as opposed to a 50 bps hike) could provide a momentary reprieve for the index as a softer pound tends to support the index.

The FTSE 100 signaled a top when price action attempted, but failed numerous times, to close above 7615 – leaving a series of extended upper wicks to show for it. Since then, the index has dropped below 7565 and the crucial 7400 level (prior swing high) to end the week.

Support lies at 7357 followed by 7283 and 7220 before the long-term ascending trendline from March 2020 comes into play. Nearest resistance, naturally comes in at 7400 with 7565 appearing an awfully long distance away. The MACD reveals a bearish crossover which tends to support a bearish outlook. However, something to note is that the FTSE has put in some impressive recoveries after sizeable two-day declines in the past. 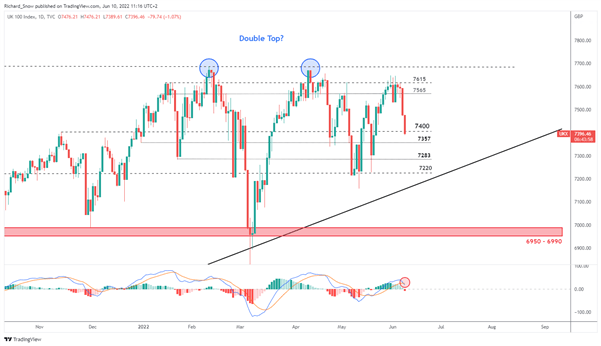 The ECB left rates unchanged at yesterday’s rate announcement, sticking to previous forward guidance and sequencing requirements. APP purchases will end at the end of June and a 25 bps hike has been viewed as appropriate by the Bank in July despite “sources” reporting after the meeting that some members are in favor of a 50 bps hike.

In addition, while the base case for the ECB for a September hike is 25bps, ECB President Christine Lagarde left the door open for a 50 bps hike in the event that medium-term inflation estimates remain above the target of 2%. The benchmark for the medium-term outlook is the 2024 inflation figure, which currently stands at a forecasted 2.1%.

A potential misstep from the ECB was to mention their ‘anti-fragmentation tool’ which is intended to remove the negative effect of fragmentation in the bond market in response to rate hikes. Subsequently 10-year yields in the EU rose (Italy, Portugal, Spain, Netherlands and Germany to name a few). Lastly, earlier today the Bundesbank cut its 2022 growth projection by more than half, from 4.2% to 1.9% adding to the bearish outlook for European equities.

The outlook for the DAX looked fairly bullish after the triangle breakout which has just about surrendered all of those prior gains. 13,910 stands in the way of continued bearish momentum and may influence where we end the week. Resistance comes in at 14,270 followed by 14,600.

The MACD also highlights a bearish crossover which suggests further downside for the DAX but as mentioned earlier, the weekly close should be monitored for developments around the 13910 level. 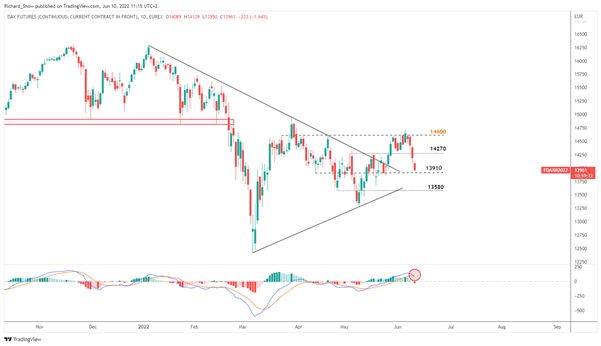