ECB sets a High Bar for a Hawkish Surprise

Members of the ECB’s governing council have reiterated the message of ending APP in early July followed by a 25 basis point hike in the July ECB meeting. In doing so, members have denied themselves the flexibility of a hawkish pivot which could see the Bank’s first rate hike this week in a bid to normalize monetary policy with the ultimate goal of calming inflation.

Instead, the ECB collective looks set to stick to earlier forward guidance in order to maintain credibility, despite inflation reaching its highest level since the formation of the single currency. On Thursday the ECB is due to release its macroeconomic projections with a large focus on the longer-term 2024 inflation outlook which last measured at 1.9% in the March update. 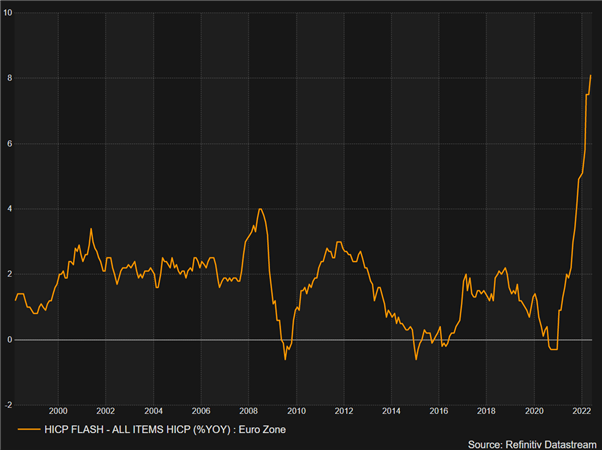 The ECB often refers to the potential de-anchoring of inflation expectations over the medium to long-term so a breach of 2% in this figure could hasten the normalization process – which may support the value of the Euro. However, as mentioned already, the probability of this at the June meeting is very unlikely despite markets pricing in over 60% for a 10 basis point hike.

Current implied probabilities via money markets approaches 75 bps by end of September, implying a 25 and 50 bps hike between July and September. Look out for any indication of a future 50 bps hike or alternatively, a strong preference for smaller 25 bps increments.

Join @JMcQueenFX for our livestream of the ECB rate decision

The technical landscape appears to reflect market sentiment of a ‘wait and see’ approach as EUR/USD oscillates largely between the 2020 ow of 1.0635 and 1.0758. Today we have seen a slightly stronger dollar (via the US dollar index ‘DXY’) which has lead EUR/USD lower.

Bulls will be watching Christine Lagarde with great interest, listening for any hawkish clues when answering questions during the press conference as EUR/USD could still provide some value from such low levels. 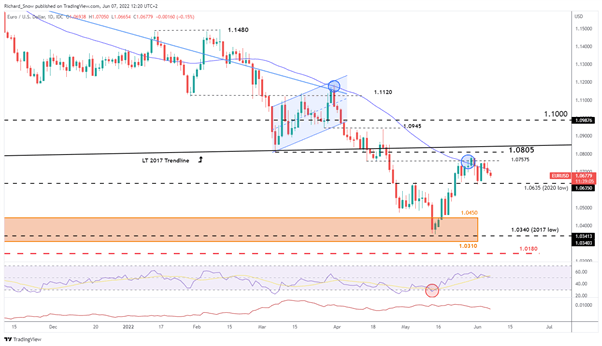 Main Risk Events for the Week Ahead

Major risk events this week include the ECB’s rate decision and press conference, CPI inflation data from the US and consumer sentiment data from the University of Michigan. 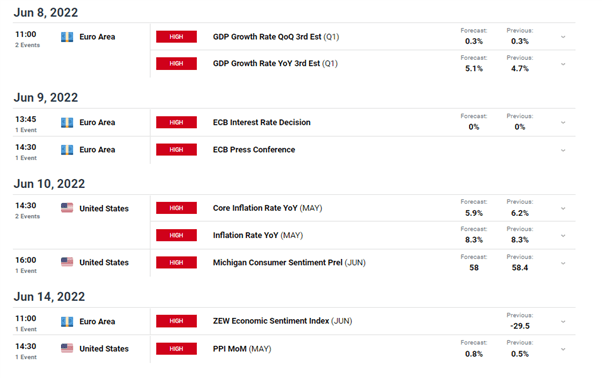