Bank of Japan (BoJ) Governor Kuroda continued to tow the line as far as the Bank’s dovish stance is concerned. Kuroda expressed that the bank must continue to support households feeling the effects of rising raw prices by retaining easy monetary policy. The BoJ mentioned that the benefit of a weaker Yen and the disadvantage of higher prices is roughly neutral. Adding clarity to the 2% inflation figure, Kuroda stated that consumer inflation of 2% needs to be persistent and not merely temporary for there to be a discussion around altering monetary policy.

Underscoring the BoJ’s dovish stance is the fact that the Japanese economy is likely to have contracted in Q1, ahead of the final GDP print on Wednesday. US inflation then takes the spotlight as core inflation is expected to drop to 5.9% from the prior figure of 6.2%. Headline inflation however, is still expected to reveal an elevated print at 8.3%, in line with the prior 8.3% for April.

Technically, USD/JPY has avoided recent attempts to move lower and now tests the yearly high at 1.3135. The most recent bullish advance began after prices bounced off the 50 SMA (blue line) and 126.95 level of support.

Comments from the BoJ distancing the Bank from tighter monetary policy exposes the Yen to further depreciation. USD/JPY has been held back somewhat due to a softer US dollar. Reports from Walmart and Target around a weaker consumer and lower overall demand, along with an economic contraction for Q1, sees the dollar consolidate at lower levels.

Nevertheless, any uptick in USD could result in a retest of 1.3135 with the BoJ opening the door to a bullish continuation. The bull flag and subsequent bounce off the 50 SMA support a bullish view. The most immediate threat to a bullish outlook is the RSI which is fast approaching overbought territory. Therefore, price action may consolidate before making a push towards the 1.3135 level. 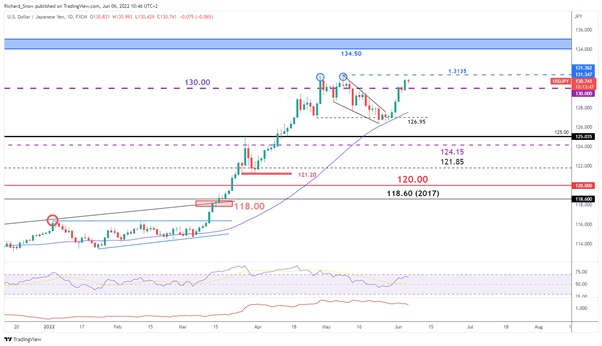 Traders are further net-short than yesterday and last week, and the combination of current sentiment and recent changes hints at a USD/JPY-bullish contrarian trading bias.