The S&P 500 continues to push higher following yesterday’s release of FOMC minutes, as traders continue to bet on a potential “pause” of Fed rate hikes later in the year. Risk pushed higher into the close yesterday as the minutes eluded to a potential “reassessment” of the tightening path following the next two FOMC policy meetings in June and July. This has seen the probability of 50 basis points (bps) in September decrease, while longer-term yields and the US Dollar have also cooled from recent peaks. These flows have provided a springboard for equities to push higher, as some of the hawkishness that has been priced in of late gets taken off the table.

In the premarket session, weaker-than-expected Q1 GDP data also helped ease pressures related to persistent Fed tightening this year. Thursday’s price action may help improve market sentiment, as the S&P 500 and Nasdaq 100 are both on track to break 7-week losing streaks. Whether the bottom is in for this downtrend remains to be seen. Threats to the outlook for risk assets remain, namely in the inflationary shockwaves from the war in Ukraine as well as China’s continued Zero Covid policy. That being said, market participants may remain split on the near-term direction for equities. Many may still argue that until we have true capitulation, whether that is a VIX spike north of 40 or another 90% down day, the bottom may not be in. 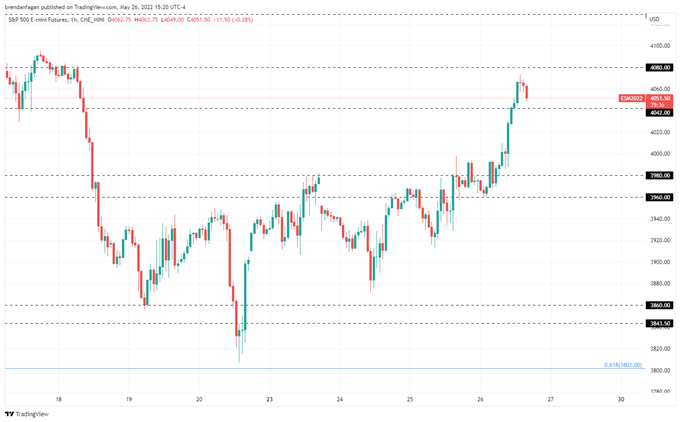 Having finally broken through recent range highs at 3980, the squeeze higher through 4000 seemed almost inevitable. Following the unwind of a number of hawkish bets, risk has continued to perform well as we edge toward the closing bell in New York. A previous pivot point at the 4042 area proved no match today, with price pushing another 30 points higher before losing steam. Something to note is that price failed to take out last week’s highs around 4095. Should those highs give way to further upside momentum, it would not be out of the question to see a squeeze to the 4160-4200 range, given extreme bearish positioning and sentiment.