The New Zealand Dollar hardly paid much attention to a mixed set of local first-quarter employment figures, underscoring what the currency is actually preparing for in a short while. New Zealand added 2.9% jobs y/y versus 3.1% anticipated. That was much slower than the 3.5% previous outcome. The unemployment rate held steady at 3.2%, as anticipated. Average hourly earnings did beat expectations.

The jobs report comes following a rather softer-than-anticipated local inflation report for the same period. In the first quarter, New Zealand CPI clocked in at 6.9% y/y versus the 7.1% consensus. This is as prices rose 1.8% q/q against the 2.0% estimate. Prior to the latest RBNZ rate hike, Kiwi traders were already pricing in a more hawkish central bank. It seems today’s data did little to alter already priced-in bets.

NZD/USD has been on a fast-paced descent since topping in April, sinking over 8.7%. In fact, April was the worst month for the exchange rate (-6.88%) since January 2015. Economic data in the United States and the relatively higher urgency from the Federal Reserve to tackle inflation more quickly likely contributed to this. Then there is the sentiment-linked role of the Kiwi Dollar.

The latter is what will make things really interesting for NZD over the remaining 24 hours. All eyes are on the Federal Reserve, which is widely anticipated to deliver a 50-basis point rate hike and unveil more details about the imminent reduction of its balance sheet. Growth in the latter is at a standstill, and this has been associated with risk aversion, negatively compounding into the New Zealand Dollar. 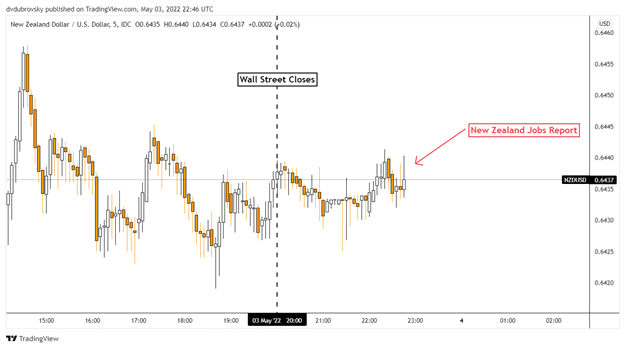 On the daily chart, NZD/USD is sitting above immediate support, which is the 123.6% Fibonacci extension at 0.6420. Prices have left behind a Hammer candlestick pattern, a sign of indecision. When these appear within downtrends, further upside closes could hint at a turning point. Such an outcome would place the focus on the falling trendline from April. Otherwise, downtrend resumption places the focus on late-June 2020 lows around 0.6380. 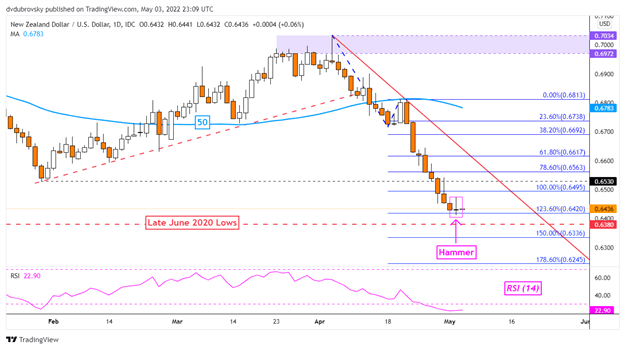