EUR/USD, US Dollar Analysis and News:

Euro Zone flash estimate of inflation rose 7.5% Y/Y, matching consensus. However, the core figure printed notably above expectations at 3.5% compared to the 3.2% expected. As such, this will further fuel expectations that the ECB will begin to raise interest rates from July, where current market pricing is near fully priced in for lift-off. Meanwhile, Euro Zone Q1 GDP came in line at 5% Y/Y with a slightly softer than expected quarterly figure 0.2% vs 0.3% expected. That said, this is unlikely to deter the ECB from stepping up its plan to normalise monetary policy.

Market reaction to the data has been muted given that the figures are unlikely to notably move the needle for the near term outlook for ECB policy. Keep in mind that the bigger focus has been on Fed policy with markets positioning themselves ahead of next week’s meeting.

Elsewhere, as we approach the turn of the month, market participants look to be using this as an opportunity to fade the recent aggressive moves in the US Dollar. A reminder that in months where the US equities (SPX) fall at least 3% or more, the US Dollar tends to rise into month end before retracing the move in the first week of the new month. This is shown in the graph below. That being said, while most can agree that the USD is overbought, the issue has been the lack of alternatives with the greenback’s major counterpart (EUR) offer little to no reasons to be bullish. However, the currency I would watch is the Chinese Yuan, where a turnaround could suggest a possible USD peak.

The largest bout of volatility stems from the month-end fix, taking place on the last business day, where market extreme moves can often occur in the lead up during 15:00-16:00 London Time. These FX flows are derived from mostly equity rebalancing. 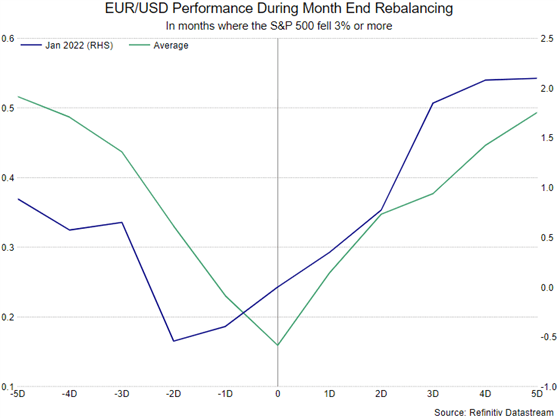