The Nasdaq 100 Index remains on the backfoot on Wednesday, following Netflix’s dismal quarterly results yesterday. Netflix reported a subscriber loss of 200,000 for the first quarter, the first subscriber decline in over a decade. Since the results crossed the wires, Netflix is down roughly 36%, making it the worst performing stock in the S&P 500 in 2022. With nearly $50 billion in market cap shaved off, Netflix now trades back at pre-pandemic levels. The results dragged other streaming giants lower, with Disney, Discovery, and Roku all shedding more than 4%. 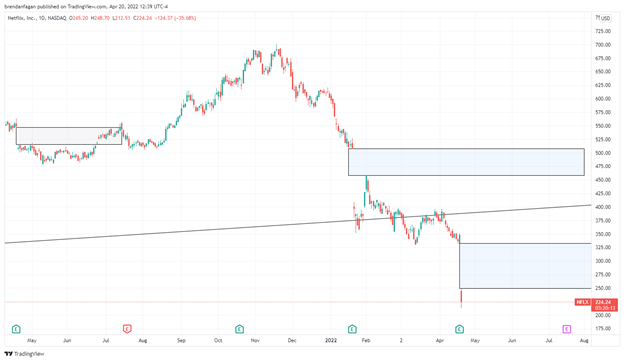 Wednesday sees Tesla report after the closing bell, an event that will steal the show given CEO Elon Musk’s recent endeavor to purchase Twitter. Prior to the report, Tesla retreated over 4% and back below $1,000 per share.

Despite global supply chain issues, Tesla is coming off an impressive fiscal year. Traders will look to the results and guidance to see if the EV company can maintain its momentum into 2022. Wall Street is expecting adjusted EPS of $2.31 for the quarter, compared to $0.93 in Q1 2021. Tesla has already announced that is produced 305,407 vehicles in Q1, which far exceeded last year’s total. With Elon Musk set to join the earnings call, market participants may be looking for clarity surrounding his recent bid to take Twitter private. It remains to be seen whether Musk would need to liquidate some of his Tesla holdings to facilitate such a buyout, or whether he may just borrow against his Tesla shares. 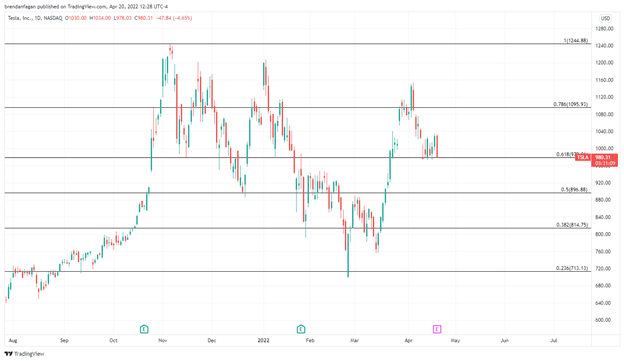 Nasdaq 100 futures (NQ) remains under pressure with many index constituents selling off during Wednesday’s session. After testing the 14300 level in the premarket session, NQ reversed sharply. 14000 may act as near term support, as traders position ahead of Tesla earnings. 14300 was tested and failed on three separate occasions, which ushered in Wednesday’s swift move lower. Breadth remains weak for the index, after the Nasdaq 100 posted its best session since March 16. As we enter a key period of earnings, we will learn more as to whether this has just been a dead cat bounce or potentially something greater. For confirmation of trend reversal, price may need to make a sustained break above the 14600 area. Until then, bears appear to remain in control. 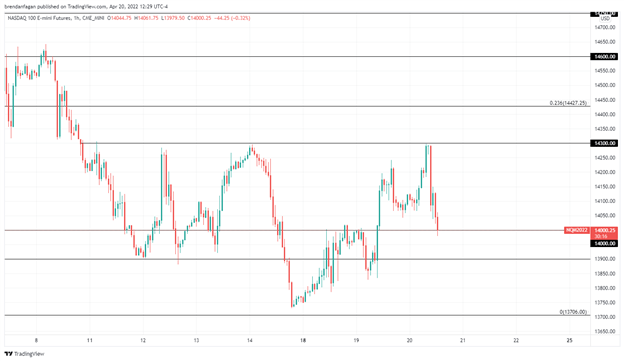