GBP/USD Price Forecast: Pound Rebound – How Long will it last?

US Treasuries Lower, US and UK Inflation Higher

On Tuesday and Wednesday we saw US and UK headline measures of inflation (inclusive of fuel and food which tend to exhibit the most volatile price changes) which both beat expectations. Upward surprises in inflation data seems to be the norm but the market took more notice of the fact that US core inflation (excluding food and fuel) data rose less than expected. A lower core inflation reading suggests that maybe inflation isn’t as widespread throughout the economy as previously observed and that we could start to see a slow down in general price increases.

This resulted in a lower yielding US 2-year as inflation concerns appeared to ease. Treasury yields and the US dollar tend to move in the same direction and therefore, we also see witnessed some softening in USD which propped up the beleaguered GBP/USD pair.

Seasonality: April Shown to be the Best Performing Month for GBP/USD

In the prior GBP report, it was revealed that April has shown to be cable’s best performing month, on average, since 2010. 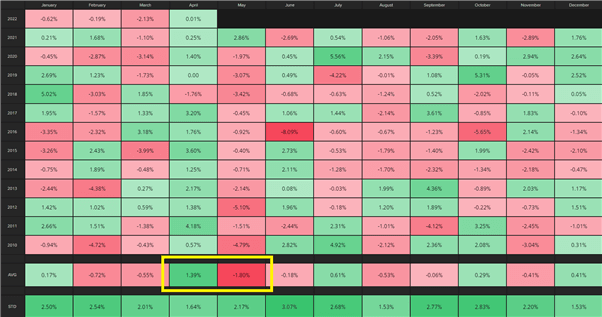 This, combined with a technical rejection of channel support, may entice sterling bulls, however, there is a rather large FX option expiry today ahead of the New York cut with a strike of 1.3000 which may see prices slide lower ahead of the US session. The real test for sustained medium-term GBP strength would be the zone of resistance around 1.3265.

Sterling wasted no time surpassing 1.3080 which leaves 1.3190 as the next level of resistance as this level temporarily capped prices in March. As mentioned earlier, the real test for the pound is that zone of resistance around 1.3265 which coincided with the mid-point of the descending channel and effectively repelled the GBP/USD advance in March.

The fairly large option expiry later today could see prices head lower. In that case, 1.3080 returns as support followed by the psychological level of 1.3000. 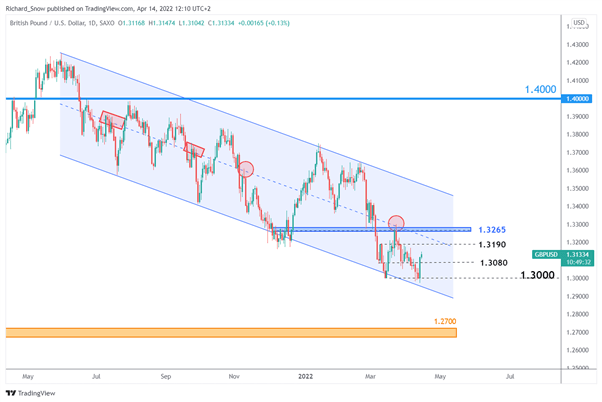 Major Risk Events over the next 7 Days

GBP/USD risk events appear to calm down in the next week, with US retail sales and Uni of Michigan consumer sentiment due later today. Other ‘medium’ risk events include initial jobless claims and comments by the Fed’s Mester and Harker.