The Bank of Canada (BoC) elected to raise its key policy rate by 50 basis points (bps), the largest hike in over two decades. The BoC also revealed that quantitative tightening (QT) would begin April 25th, as the central bank looks to tackle inflation that sits at three-decade highs. The policy statement indicated that “interest rates will need to rise further” as inflation has surpassed previous forecasts for 2022. Notably, there was a significant upward revision to inflation forecasts, with the BoC now seeing inflation around 6% for much of the first half of 2022.

Canada has struggled to contain price pressures, much like other central banks. Back in January, the BoC predicted inflation would be 5.1% in the first quarter. However, it is on pace to surpass 6%, well above the BoC’s 2% target. As a result of Russia’s invasion of Ukraine, economists globally have been forced to reconsider inflation and growth estimates.

The BoC also revealed its plans for balance sheet reduction, with the central bank electing not to replace bonds as they roll off the balance sheet. QT is set to begin on April 25, with roughly a quarter of government debt acquired during the pandemic (roughly C$350 billion) set to mature over the next 12 months. 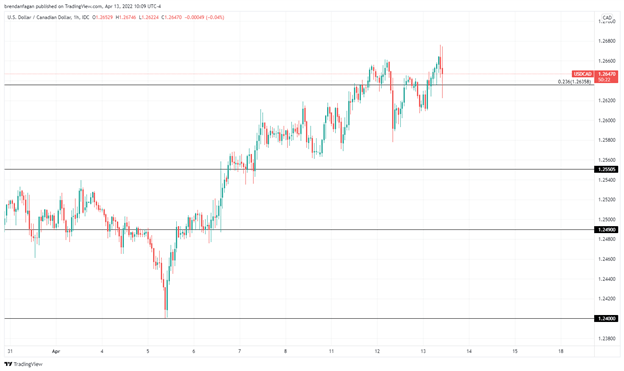 USDCAD continues to point higher despite the hike from the Bank of Canada. There was a brief period where the cross fell in 9 consecutive sessions, with Canadian Dollar strength being fueled by surging oil prices. That decline bottomed on April 5th around 1.2402, and has since rebounded sharply. A decline in risk appetite has seen USD catch a sizeable bid of late, with the US Dollar Index rising for the last 10 days. With USDCAD firmly pointed higher, any dips may be bought as we inch closer to the May FOMC meeting, where the Fed is expected to raise by 50 bps and also unveil plans for balance sheet reduction.