More EU, UK and US Imposed Sanctions on the Way

In light of alleged Russian war crimes in Bucha, the US, UK and EU have stepped up efforts to impose further sanctions on Russia. EU sanctions are likely to target Russian coal, banks, ships entering EU ports and road operators, with oil related bans being discussed. UK foreign secretary, Liz Truss echoed the call for a “tough new wave” of sanctions from G7 and Nato ministers.

While the sanctions have been deemed necessary in light of Russia’s invasion of Ukraine, the impacts have hit the EU and UK particularly hard as both nations rely on Russia for their energy needs, particularly the EU. The EU is currently plagued with possibly being behind the curve when it comes to policy normalization at a time when GDP growth appears under threat; while the UK deals with the inflation-induced ‘cost-of-living’ crisis.

Tomorrow we see the ECB monetary policy meeting accounts and retail sales data for February which is due to be much less than January’s figure but relatively strong. Next Tuesday we see the initial ZEW economic sentiment data for April while March’s figure turned sharply pessimistic at -38.7. Negative figures express a pessimistic economic outlook.

Sterling drivers appear to be picking up with the Feb GDP figure, unemployment numbers and crucial inflation data which will factor into the Bank of England’s decision to keep hiking rates. In the US, core and headline inflation data could influence the magnitude of upcoming Fed rate hikes, with a hot print likely to favor at least one 50 basis point hike over the next two meetings and possibly two 50 bps hikes. Markets currently price in 90 bps worth of tightening over the May and June meetings but a hotter than anticipated print could see markets price in 100 bps (two 50 bps hikes by the end of June) 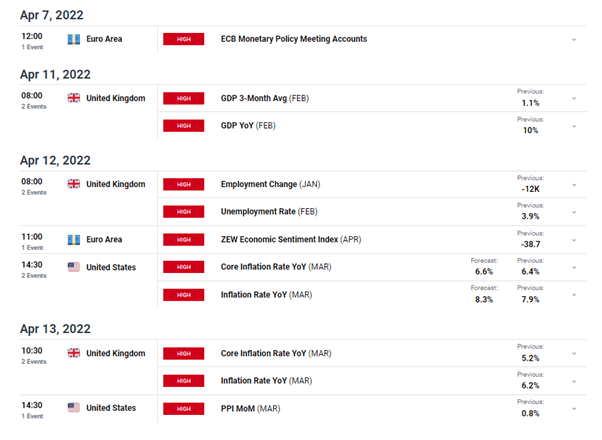 EUR/GBP experienced a complete turnaround after climbing to 0.8500 on renewed hopes of ‘peace talks’ between Ukrainian and Russian representatives. The embattled euro surged over three days of impressive price action but stalled around 0.8500 and the descending trendline and came crashing down as the good news subsided over time.

The euro now looks to test the 0.8300 – 0.8310 zone of support once more but may find it difficult to break below it as GBP drivers are absent for now. Next week’s inflation figures may provide some GBP impetus if inflation beats forecasts. However, the effect may not be long lasting as markets are already pricing in an aggressive path of further rate hikes 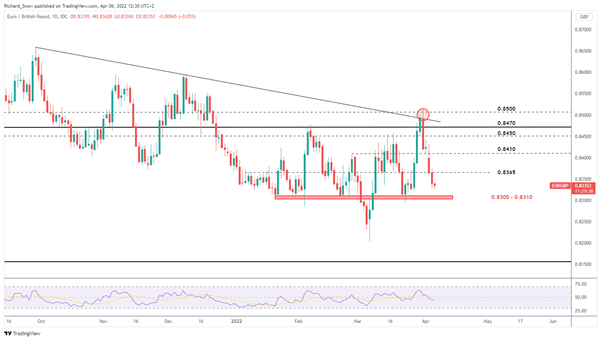 The pound has trended lower against the dollar since June 2021 and continues to show little sign of a major reversal. Sterling failed to break above 1.3265 which coincided with the mid-point of the descending channel and has been moving lower ever since. The pair trades around 1.3080 with the next level of support coming in at 1.3000. Rising inflation and treasury yields, along with the greenback’s safe-haven appeal continue to boost the dollar, leaving the pound in a rather susceptible spot. 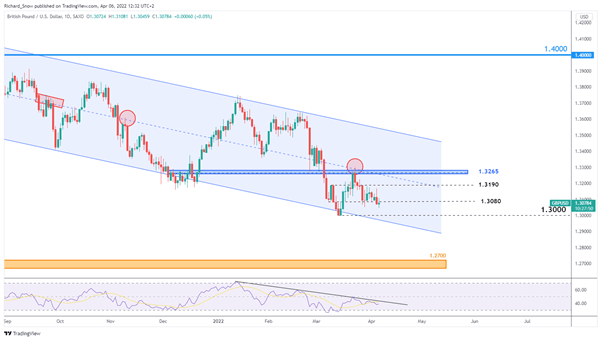