In the absence of a major surprise, Jerome Powell is set to announce the first 25 basis point hike in the US since the pandemic, later today. While 25 basis points is the consensus view, chances of the less favored 50 basis points (based off of implied probabilities derived from Fed funds futures) rose to 13%, up from 9% yesterday.

The rate hike has been priced in for some time now however volatility is almost always experienced around rate announcements, especially if it is the first within a rate hiking cycle. In addition to the rate hike, the latest quarterly projections are due - which includes the dot plot showing members’ anticipated timeline for future rate increases. The press conference will however garner a lot of attention concerning the negative impacts of the Ukraine crisis and economic sanctions, as well as the validity of the most recent projections as there is a chance that they have been finalized prior to the Ukraine invasion.

EUR/USD Driven by USD and Ukraine, Shrugs off Economic Data

The Euro has not fared well against the US dollar, largely due to Europe’s dependence on Russian energy and general proximity to the conflict, while the dollar has received a strong ‘safe-haven’ bid at the start of its rate hiking cycle. In short, strong dollar, weak Euro.

The above-mentioned factors have proven to be the main drivers of the pair as the sharp drop in ZEW economic sentiment data and Christine Lagarde’s comments yesterday had little to no effect on the pair, which actually traded higher on the day.

The Euro has failed to rise with any significant momentum since June 2021 – providing numerous opportunities to sell the pair on pullbacks. Admittedly, EUR/USD temporarily broke above trendline resistance, peaking around 1.1495 before trading back below the line.

More recently, price action looks to have formed a triangle pattern as the market positions itself ahead of the FOMC announcement later today. Such consolidation creates a helpful criteria to assess post-FOMC price movement. While price action around the event is likely to be rather volatile, traders can use the high and the low of the triangle as tripwires to assess near-term breakout opportunities once the dust has settled.

In the event that markets perceive comments made at the press conference to be dovish, we could see a momentary drop in the dollar which could lift EUR/USD. Look for breaks above 1.1150 for a potential move higher.

On the other hand, a hawkish message from the FOMC is likely to support the dollar, creating a greater divergence between the Fed’s and the European Central Bank’s (ECB) monetary policy trajectories, which may send EUR/USD lower. Look for a move below 1.0805 for an indication of a possible move lower. 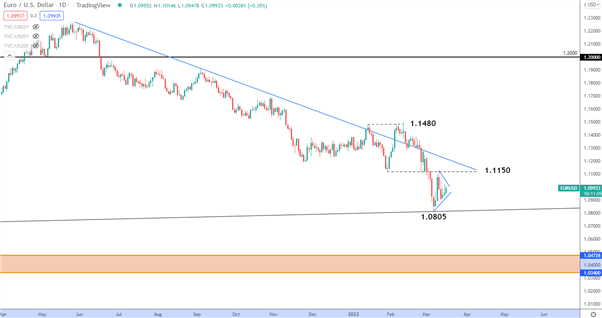