Crude oil continues to rise in a parabolic fashion, remains highly volatile and is likely to become increasingly more responsive to news headlines.

President Joe Biden held a video conference with leaders of France, Germany and the UK on Monday to discuss a potential ban on Russian oil imports. The United States is not as reliant on Russian energy imports as Europe currently is. Germany is the biggest buyer of Russian crude oil and has so far rejected the ban. Europe’s largest economy has initiated procedures to divest itself from Russia as it looks for alternative solutions. There is still a probability that the U.S. goes ahead with the ban on its own.

In a response to sanctions, Russia’s Deputy Prime Minister Alexander Novak warned, “It is absolutely clear that a rejection of Russian oil would lead to catastrophic consequences for the global market”. He went on to add, “The surge in prices would be unpredictable. It would be $300 per barrel if not more”.

OPEC officials have reiterated that the current price spikes in oil have nothing to do with OPEC and are a result of supply disruption fears. The Organization of Petroleum Producing Countries decided in its most recent meeting to continue to add 400,000 barrels per day to the group’s output for April in an attempt to ramp up supply to similar levels experienced before the pandemic.

In addition, the Iran nuclear deal has taken longer than anticipated as the market holds out for an increase in oil supplies from the sanctioned nation.

During the London session, news broke that Shell will join the list of companies that have either fully divested or are phasing out of Russia.

Oil has risen with great momentum and remains extremely volatile in a difficult trading environment. The chart below shows the recent uptick in volatility (blue line) alongside the price of oil (white line). While this is still a long way off March 2020, it is now the most volatile period since the beginning of the pandemic. 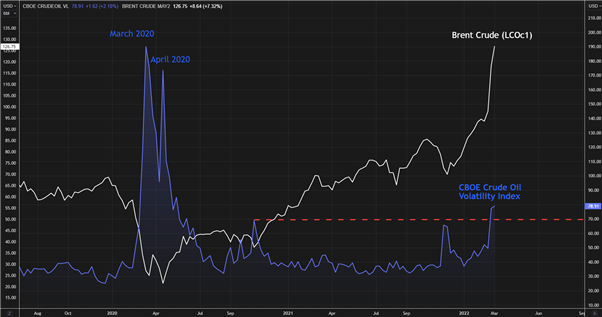 The moves in Crude oil have been so drastic that a monthly chart is needed to view the most relevant levels of resistance. In March this far, we have already seen more than a 38% rise in the price of oil which has pulled back somewhat yesterday and the day before. 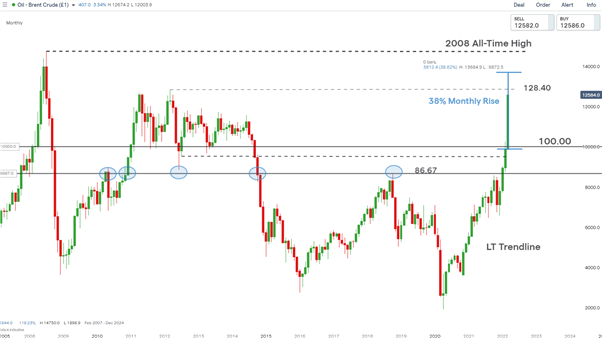 The daily chart reveals the recent pullback which is currently viewed as the markets taking a breather in the wake of the potential ban on Russian oil by the United States. Should the 118.21 level provide a springboard towards the all time high of 147.27, there would need to be a move above 128.40 with incredible momentum.

However, the fundamental and geopolitical factors surrounding oil remain highly uncertain and a sharp move lower cannot be discounted should the pullback extend lower. 118.21 is the nearest level of support followed by psychological levels of 110.00 and 100.00. A key consideration here is that markets can remain in overbought/oversold territory for extended periods of time when markets attempt to navigate through geopolitical uncertainty. 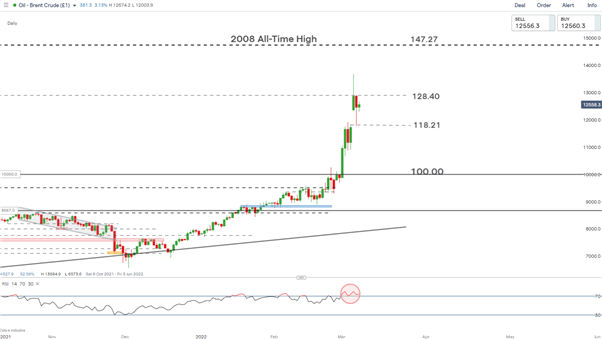