Global stock markets are on the backfoot in Europe as news of intensified fighting in Ukraine continues to hit the screens. The Southern port city of Kherson is now said to be under the control of Russian forces, while there have also been reports that the 2nd largest city in Ukraine, Kharkiv, is under constant attack. Meanwhile, the 40-mile convoy of Russian vehicles and forces are slowly moving towards Kyiv despite reports of heavy resistance and fuel shortages. The second round of talks between representatives of both sides is scheduled for today but, barring a miracle, nothing is expected currently to change or stem Russian aggression.

The geopolitical crisis remains the main driver of risk at the moment and will continue to do so until a peace agreement is signed, but further economic headwinds are being felt by multi-year high oil prices that are likely to weigh on demand. In addition, global central banks are beginning to, or have stated that they will, raise interest rates and rein in the excessive, pandemic liquidity that they have pumped into the market over the last two years. Tighter monetary policy, sky-high oil prices, and war in Eastern Europe are not a good backdrop for risk assets.

The S&P 500 is flat on the session after yesterday’s rally saw both the S&P 500 and the Dow just over 1.8% higher on the day. Small bull market corrections are often seen in longer-term bear markets and investors may be wise to hold back before entering fresh long positions until the macro picture becomes clearer. Short-term resistance at 4400 may well be tested but the daily chart still paints a negative picture with a series of lower highs and lower lows. 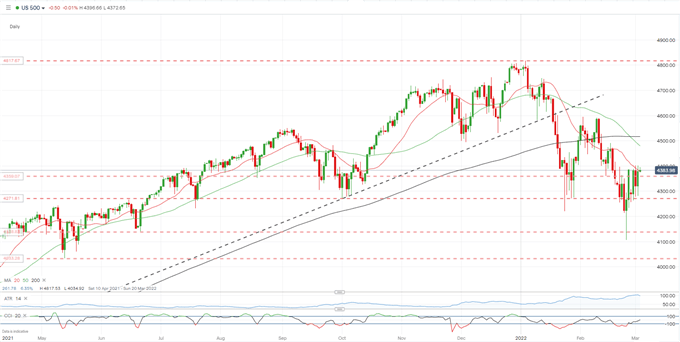 The DAX 40 is currently just under 1% lower on the day and remains within touching distance of Tuesday’s one-year low. The German bourse’s recent, heavy sell-off is being driven by German energy fears with the country heavily dependent on Russian oil and gas. A break below last February’s low of around 13,654 would leave 13,274 as the next target. 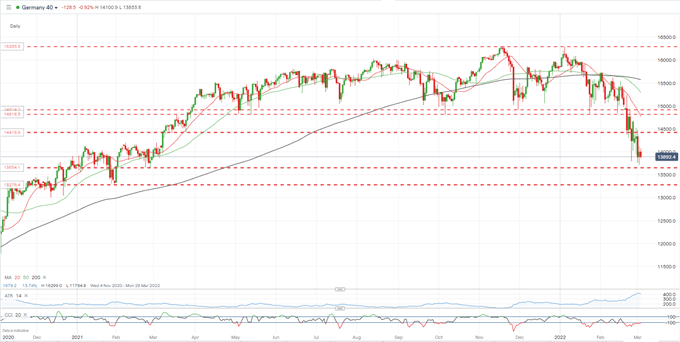 What is your view on Equities and Risk – bullish or bearish?? You can let us know via the form at the end of this piece or you can contact the author via Twitter @nickcawley1.