Gold prices breached above a key resistance level of 1,916 and closed at a 14-month high of 1,944 on Tuesday. Prices pulled back slightly during Wednesday’s APAC mid-day trading session as investors assessed rising geopolitical unrest in Eastern Europe. Russia’s invasion of Ukraine runs into a sixth day. Russian defense minister Sergei Shoigu said that the country will continue its military operation in Ukraine until it achieves its goals, showing no signs of stopping the attack any time soon. Meanwhile, Western power imposed more economic punishments against Moscow, raising the possibility of banning its energy exports – a major revenue source for Kremlin.

Prior to this, President Vladimir Putin put Russia’s nuclear deterrent on high alert after Western powers launched stringent economic sanctions against it. Those include barring seven Russian banks from the SWIFT payment system, potentially disrupting the country’s settlement of trade in crude oil, natural gas, metals and other commodities. The bloc has also frozen the assets of Russia’s central bank, a move that may limit its ability to shore up its currency. Russian Ruble lost 30% of its value against the Greenback over the past three trading sessions as the Ukraine crisis deepened.

With the conflict between Russia and Western powers over Ukraine intensifying, haven demand is likely to keep the yellow metal afloat. The large amount of geopolitical uncertainty spurred a flight into safety and buoyed demand for gold, which is perceived as a hedge against such risks.

Meanwhile, US Treasuries were on bid too, sending yield of 10-year notes to the lowest level in six weeks. The real yield, as represent by the 10-year inflation-indexed security, have declined 17bps to -0.97% from a day ago (chart below). Falling real yields are a strong positive catalyst for gold as the opportunity cost of holding the yellow metal is now substantially lower. 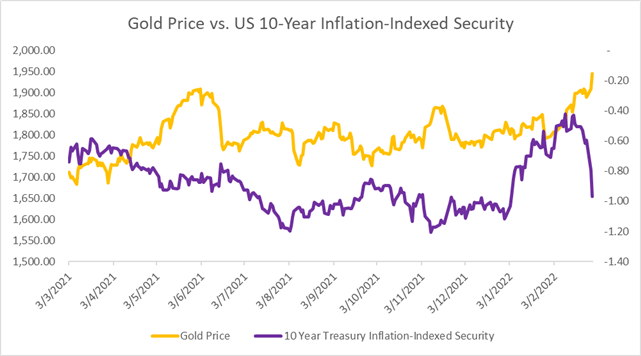 In the near term, heightened geopolitical risks and the resulting adverse economic impact may allow the central bank to hold back rate hikes, underpinning gold prices. Meanwhile, prices of crude oil, natural gas, metals and grain are soaring due to sanctions imposed on Russia and supply chain disruptions in Eastern Europe. This may lead to even higher inflation around the globe, creating a condition for stagflation. Therefore, central banks will have to strike a balance between geopolitical risks and inflation. This puts Fed Chair Jerome Powell’s congressional address later today in the spotlight.

Technically, gold prices breached above a key resistance level of $1,916 and thus opened the door for further upside potential with an eye on $1,954 – the 127.2% Fibonacci extension. The overall trend remains bullish-biased, as indicated by the formation of consecutive higher highs and higher lows. The MACD indicator is trending higher above the neutral midpoint, suggesting that bullish momentum is dominating but prices may be vulnerable to a technical pullback. 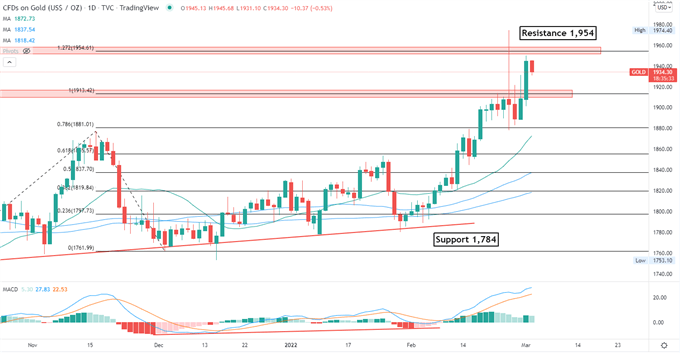