Crude oil prices extended higher during Tuesday’s APAC mid-day session, hovering at fresh 7-year highs. WTI is trading above $96 bbl, and Brent is above $99 bbl. Prices are driven by Russia’s invasion of Ukraine and the follow-on economic sanctions imposed on Moscow by Western powers. Those include barring some Russian banks from the SWIFT payment network, which is crucial to its settlement of trade in oil and other energy products. The closure of Ukraine-based railways and ports further complicates supply chain disruptions in Eastern Europe, sending commodity prices higher.

President Vladimir Putin put Russia’s nuclear deterrent on high alert, marking a further escalation in tensions as the West attempted to isolate Moscow from the global banking and financing system. The increasingly assertive stance by Western leaders suggests that Russia’s energy exports could be the next on their sanction list if the situation deteriorates further.

The US is coordinating a 60 million-barrel-release of strategic reserves among some of the world’s major oil consumers. This amount is equivalent to just 6 days of Russian production, and looks to have fallen short of market expectations. Therefore, oil prices may see more upside potential as the first batch of strategic reserve release doesn’t seem to be sufficient to quell supply shortages in a tight market.

Russia is the world’s second-largest oil exporter after Saudi-Arabia. It remained the largest supplier of natural gas and crude oil to the EU in 2021, underscoring their crucial energy ties. As the geopolitical crisis in Ukraine deepens, it may spiral into an energy crisis and push oil and gas prices higher. Therefore, oil traders are vigilant about further escalation of the conflict that may lead to restrictions on Russia’s oil exports.

Meanwhile, China’s official manufacturing PMI climbed to 50.2 in February, up from 50.1 in January. The reading was higher than a market forecast of 49.9, underscoring healthy growth momentum in the world’s second-largest economy. February is seasonally a weak month for manufacturing activity due to the Lunar New Year holiday. A stronger reading boosted investor confidence and may buoy energy prices. 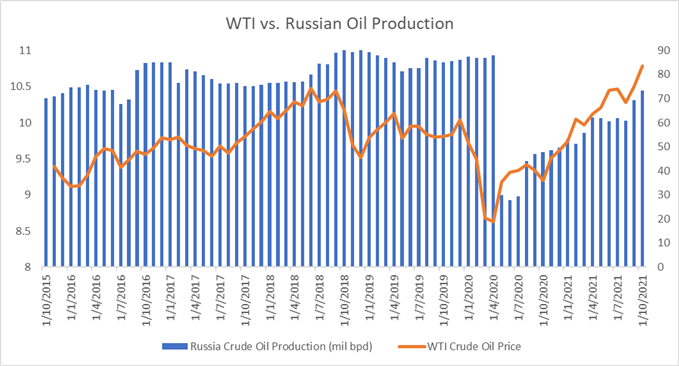 Technically, WTI is trending higher within an “Ascending Channel”, as highlighted on the chart below. The upper and lower bound of the channel may be viewed as immediate resistance and support levels respectively. Prices have likely breached above a key resistance level of 94.61 – the 261.8% Fibonacci extension. Breaching this level exposes the psychological resistance level of $100. The MACD indicator is trending higher above the neutral midpoint, suggesting that prices riding a strong uptrend but may be vulnerable to a technical pullback. 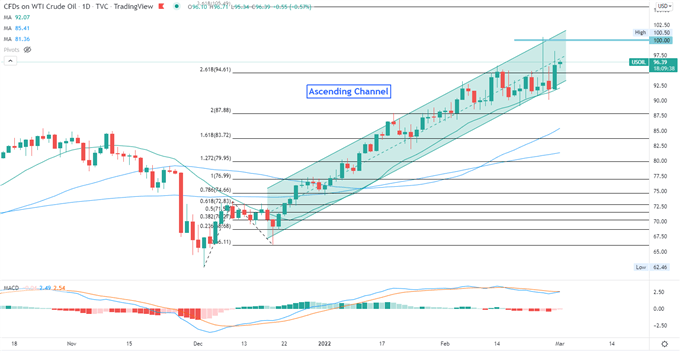