The Australian Dollar was slightly softer after the RBA left rates unchanged but is still at elevated levels. The bank had stated at their last meeting that rates were likely to be on hold until the May meeting.

The focus for markets is on what the RBA will do with the asset portfolio accumulated over the last 2-years and there was no mention of their intentions in their statement today.

Many commentators expect the bank to let the assets roll off the balance sheet as they mature.

The RBA see inflation ticking up toward the end of the year and then easing in 2023. It appears that they are focused on a lack wage pressures.

This relatively dovish stance by the RBA is in contrast to the Fed and some other central banks globally that have been explicitly hawkish. The events in Ukraine appear unlikely to rattle these trajectories at this stage.

For now, AUD/USD seems to be more concerned on commodity prices.

Prior to the rate decision, the ASX 200 was up around 1% on the day and it was little changed in the aftermath. This is largely on the back of significant gains across the commodity complex.

Australian inflation came in hot for the fourth quarter of 2021. Sadly, we will not be getting any further guidance on CPI until late April.

It would seem that this is a key reason why the RBA stated at their last meeting that they will not be reconsidering any movement on the cash rate until the May monetary policy committee meeting.

Several market participants have been calling on the Federal government to provide additional funding to the Australian Bureau of Statistics (ABS) to increase the frequency of consumer price inflation data.

It is currently released quarterly. The RBA is mandated by the Federal government to maintain CPI, on average, between 2 and 3% over the medium term.

It would appear to be a lay down misere to increase the frequency to monthly for such a crucial component of economic management for Australia.

Not for the first time, in 2018 the ABS petitioned the government for such a move. It was supported by several market participants, including the Australian Financial Markets Association (AFMA), a body representing the financial markets industry.

The RBA has been calling on such a change for a long time. It should be pointed out that Australia is one of only two nations in the G-20 that do not report CPI monthly.

Unfortunately, the government is yet to act. This undermines the RBA’s ability to get an accurate and timely read on price pressures within the economy.

For traders, this means that the RBA’s April meeting could be very similar to today’s decision, a non-event until after first quarter CPI is released.

Australian GDP will be released tomorrow (Wednesday), with analysts expecting an annual growth rate of 4.1% to the end of the fourth quarter.

The global geopolitical environment is clearly front and centre and the impacts will continue to be felt. Particularly in relation to commodity prices, where they appear to be driving the direction for AUD/USD for now. 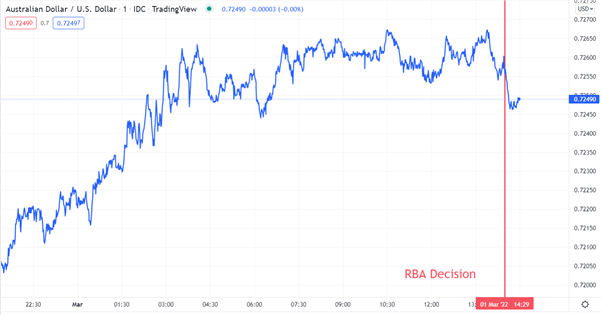