US Dollar Price, Chart, and Analysis

The Bank of Russian more than doubled its bank rate earlier today to 20%, from 9.5%, as the central bank stepped in to try and prevent a currency crisis after the US and the West imposed stringent sanctions on the country, including a partial expulsion from the SWIFT payment system. A statement by European Commission President Ursula von der Leyen said the removal of certain Russian banks from the system would ‘stop them from operating worldwide and effectively block Russian exports and imports’ before adding that the action would ‘paralyze the assets of Russia’s central bank…and make it impossible for them to liquidate its assets’.

An excellent primer on why Russia’s exclusion from SWIFT is a potential game-changer.

With countries around the world increasing economic sanctions against Russia on an ongoing basis, the Russian central bank hiked rates to prevent a run on the Ruble, although this did not prevent the currency from weakening further. The US dollar/Russian Ruble traded as low as 74.2 on February 10 and is now quoted above 100, although a lack of liquidity, and heightened volatility, may see this quote change sharply over the coming sessions. 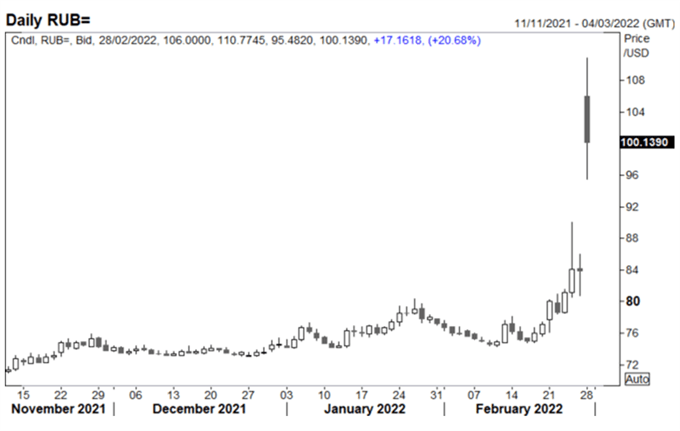 A range of other FX-pairs were impacted by the SWIFT announcement although currently, these moves remain limited.

Earlier today, the Russian Stock Exchange announced that the country’s main equity market (MOEX) would not open on Monday, in an apparent effort to block an anticipated wave of heavy selling. Russian companies quoted in Europe saw further massive losses, continuing last week’s trend, with Russian oil giant Gazprom’s GDR quoted around 50% lower, gold miner Petropavlovsk seen 26% lower, while Evraz plc, a British steel manufacturing company with significant operations in Russia, were quoted over 25% lower. In further action from corporations to distance themselves from Russia, BP announced it was selling its 19.75% stake in Russian oil giant Rosneft, while the $1.3 trillion Norwegian Wealth Fund said that it is preparing to sell its Russian investments.

What is your view on the Russian Ruble and MOEX – bullish or bearish?? You can let us know via the form at the end of this piece or you can contact the author via Twitter @nickcawley1.