US Preview: Gold, Oil and Equities Respond to Sanctions and Russian Advances

Price Action and Sanctions Swing Back and Forth

We continue our coverage on major markets as they respond to the unfolding invasion of Ukraine. Yesterday, a wave of sanctions were imposed on Russia by President Biden while on the European front, talks of a third round of sanctions are in the works, according to a German government official. Russia has issued a statement that it too intends on issuing sanctions aimed at hurting the west. Many of the major tradable assets have clawed back, or significantly recovered from yesterday’s massive moves as the immediate effect of recent sanctions are evaluated.

Strategist, Nick Cawley commented on recent developments, “wild price action seen in the gold space on Thursday has calmed today with the precious metal sitting quietly in a very small range so far.”

Nick continues, “Gold hit the mid-$1970s/oz yesterday on news that Russia had invaded Ukraine but then turned sharply lower and negative on the day in late-European trade as a wave of risk-on sentiment swept over the markets. With no clear driver identified behind this move, gold will remain on edge over the coming days and weeks.

The war certainly complicates the job of major central bankers as they weigh measures to control inflation alongside negatively affected future growth estimates likely to result from the conflict.” 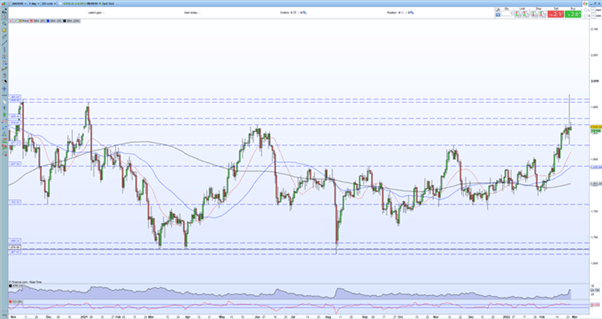 Later today we have the Fed’s favored inflation reading, Core PCE, released at 09:00 EST and this is expected to show that inflation continues to move higher, ratcheting up the pressure on the Fed to hike rates hard and fast. The volatile situation in Eastern Europe however may stimy the Fed’s plans, in the short-term at least, leaving gold with the room to move higher.

However, oil, similarly to gold, witnessed a relatively smaller pullback but softer prices nonetheless as news of the US administration working with the IEA to potentially release strategic oil reserves. 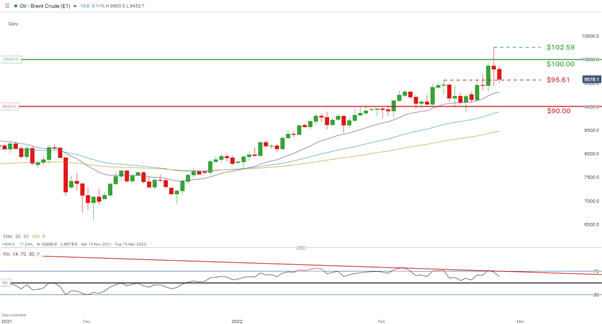 A Short-Term Reprieve in Oil Prices?

From a U.S. perspective, tapping into SPR (Strategic Petroleum Reserves) is on the table according to the Biden administration however, this may only be a short-term solution for the consumer.

A lot has been said recently regarding global equities and the upcoming rate hikes anticipated by central banks. Much of that has centered around lower economic growth and lower valuation forecasts but also lower observed equity valuations as a result of rate hiking cycles.

However, Strategist, Justin McQueen takes a look at the historical performance of the S&P 500 Index just before and weeks after previous invasions which reveals interesting results for equity bulls.

Justin McQueen, “As shown below, geopolitical events have often been short term in nature, with markets posting a full recovery in the subsequent 4-5 weeks. In fact, invasions of the past have tended to present an opportunity for bulls.” 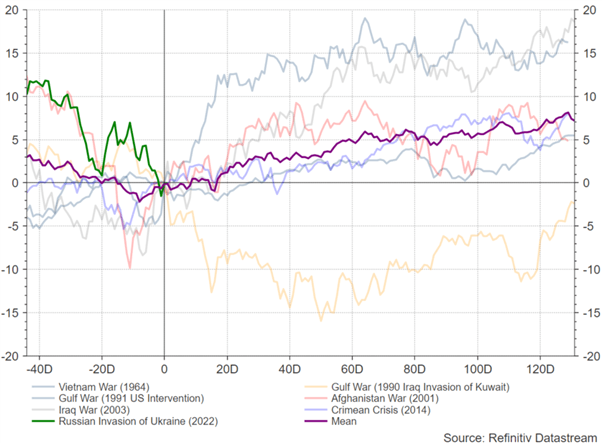