Sanctions on Russia then ensued in efforts to hurt Russia’s access to technology and financing however, with many regions around the world so reliant on Russia’s exports, caution was taken minimize the impact on these dependent countries (for now). Since yesterday, crude prices have tracked higher as supply fears re-emerge, considering low inventories stockpiles globally. Shipping costs have followed suit as vessels endeavor to navigate the present hostile waters in the Black Sea.

From a U.S. perspective, tapping into SPR (Strategic Petroleum Reserves) is on the table according to the Biden administration however, this may only be a short-term solution for the consumer.

Spotlight now shifts to OPEC+ who has disappointed in its global supply growth trajectory. The world will be seeking some form of respite from rampant crude oil prices via increased supply from oil producers within the OPEC+ collective.

Russian Ural oil is under pressure with the rest of the world hesitant to purchase from Russia as the ease of doing business swiftly declining. Letters of Credit (LC’s) that are used as a guarantee of payment from a buyer to a seller are being denied by certain Western banks in relation to Russian oil. The increase in difficulty of purchasing from Russia may deter some buyers but one has to consider the significant discount that Russian Ural oil is currently trading at, potentially making the extra effort somewhat worth it.

An announcement from Interfax (Russia) revealed Russia is preparing a set of its own sanctions which could severely hamper the economic situation in the EU should it include a constraining of commodity supply to the region. Europe accounts for roughly 50% of Russian oil exports and anything along the lines of oil limitations could spark another price rally.

Cutting of Russia from SWIFT (messaging structure that banks use to facilitate cross-border payments) has been on the agenda from many nations but consensus on such a decision is stopping such a penalty at this time. This has allowed oil prices to draw down today, reducing fears around curtailed Russian oil exports.

An advancing dollar has contributed to limited oil price upside (traditionally inverse relationship between USD and crude oil prices). Coming up later today there are dollar influencing economic releases (see calendar below) but with geopolitics taking center stage, it won’t be much of a surprise should these events result in minimal market impact. Focus will of course be on U.S. core inflation which is traditionally known as the Federal Reserve’s preferred inflation metric. Under normal circumstance we would see a stronger dollar should actual data exceed or come in line with forecasts (5.1%) as rising core inflation lends itself to a more hawkish Fed. 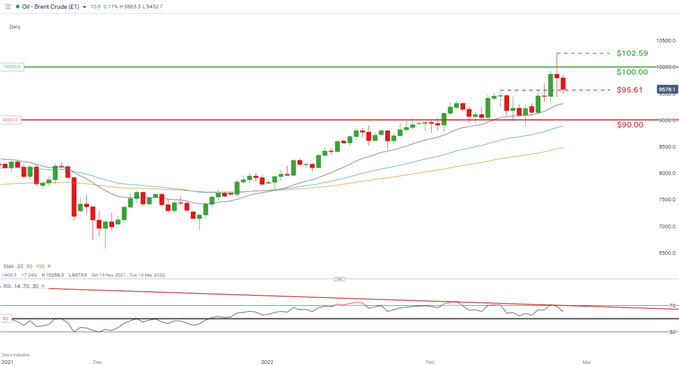 Yesterday’s long-legged doji candle is suggestive of indecision which markets have seemed clarify in terms of directional bias with today’s softer price action. The Relative Strength Index (RSI) adds to this outlook with the presentation of bearish divergence (red) whereby crude oil price action (higher highs) contradict the RSI reading (lower lows). Generally, bearish divergence points to a move lower but timings can be difficult to predict. This being said, geopolitical pressures remain at the forefront of price volatility and will continue to dictate global market movements.

IGCS shows retail traders are marginally NET LONG on Crude Oil, with 54% of traders currently holding long positions (as of this writing). At DailyFX we typically take a contrarian view to crowd sentiment resulting in a short-term downside bias.