Crude oil prices extended higher during Wednesday’s APAC mid-day session, hovering at fresh 7-year highs. WTI is trading above $92 bbl, and Brent is above $97 bbl. Prices are driven by intensified Russia-Ukraine tensions and sanctions after Moscow recognized the independence of two breakaway eastern Ukrainian provinces of Donetsk and Luhansk on Tuesday before sending “peacekeeping forces” to the area. The move drew harsh condemnations from Western powers, with the US, UK and Germany subsequently announcing initial sanctions against Russia.

US sanctions will target Russia’s sale of sovereign bonds abroad and the country’s elites. This fell short of the devastating measures that had been threatened, however. President Joe Biden had vowed to impose “swift and severe consequences” if Russia attacks Ukraine. The UK will freeze the assets of five Russian banks, along with those from three Russian billionaires. Germany will halt the Nord Stream 2 gas pipeline project, which is designed to transmit Russian gas directly to Germany, as part of the sanctions. The allies are prepared to impose stricter punishments if Russia moves forward to invade its neighbour.

Still, oil traders are vigilant about a potential escalation in the conflicts that may lead to restrictions on Russia’s oil exports, adding supply constraints in an already tight market. Russia is the world’s second-largest oil exporter after Saudi Arabia, shipping around 5 million barrels of crude oil per day. Nearly half of it went to the European countries in 2020. Russia remained the largest supplier of natural gas and crude oil to the EU in 2021, underscoring their crucial energy ties. If the Ukraine crisis deepens further, it may spiral into an energy crisis and push oil and gas prices higher. Given high inflation rates around the globe, policymakers may refrain from using the last card in their hand, however.

Meanwhile, market participants are also eyeing developments in nuclear talks with Iran, which bring hopes for more Iranian barrels to the market. Sources said that the talks are drawing to a close, paving the way for lifting sanctions and adding about 1 million barrels per day of official exports. This may weigh on oil prices. 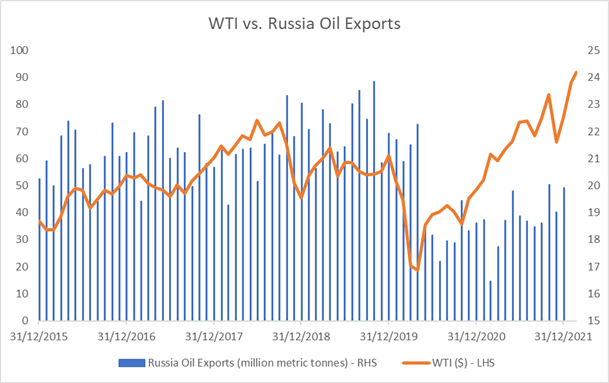 Technically, Brent is trending higher within an “Ascending Channel”, as highlighted on the chart below. The upper and lower bound of the channel may be viewed as immediate resistance and support levels respectively. A key resistance level can be found at around $97.80 – the 261.8% Fibonacci extension. Breaching this level will expose the psychological resistance level of $100. The MACD indicator is trending higher above the neutral midpoint, suggesting that prices riding a strong uptrend but may be vulnerable to a technical pullback. 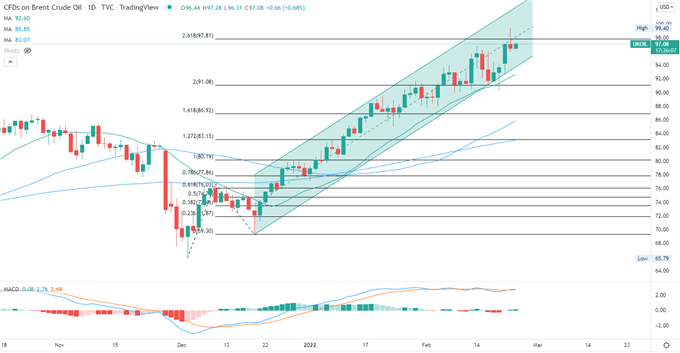