Gold prices extended higher to $1,909 during Tuesday’s APAC mid-day trading session following a drastic escalation of geopolitical tensions in Eastern Europe. Russian President Vladimir Putin ordered “peacekeeping forces” to two breakaway regions in eastern Ukraine after recognizing their independence on Monday. There were no details about how many Russian troops are to be sent, or when.

Washington said the move was part of Moscow’s attempt to create a pretext for a further invasion of Ukraine. The US and Europe may ramp up new sanctions against Russia if the situation deteriorates further. US President Joe Biden will issue an executive order soon to prohibit “new investments, trade and financing by US persons to, from, or in” the two breakaway regions, the White House said.

Escalating geopolitical unrest may pave the way for heightened market volatility and buoy demand for gold, which is widely perceived as a havenasset. Since the Ukraine situation is highly fluid and ambiguous, gold prices may have more upside potential to go until the political skies are clear. Furthermore, heightened geopolitical tensions appear to be outweighing worries about Fed tightening in recent days, alleviating pressure on the yellow metal.

Demand for safety also drove up prices of US Treasury notes, sending their yields lower. The rate on 10-year inflation-indexed securities fell 8bp to -0.59% from -0.51% a day ago, making non-interest-bearing gold more appealing to investors as the opportunity cost of holding the precious metal drops. Gold prices and the 10-year real yield historically exhibit a negative correlation, which can be visualized on the chart below.

Technically, gold prices breached above a key resistance level of $1,876 and thus opened the door for further upside potential. The next resistance level can be found at $1,916 – the previous high seen in May 2021. The overall trend remains bullish-biased, as indicated by the formation of consecutive higher highs and higher lows. The MACD indicator formed a bullish crossover and trended higher, suggesting that buying pressure may be building. 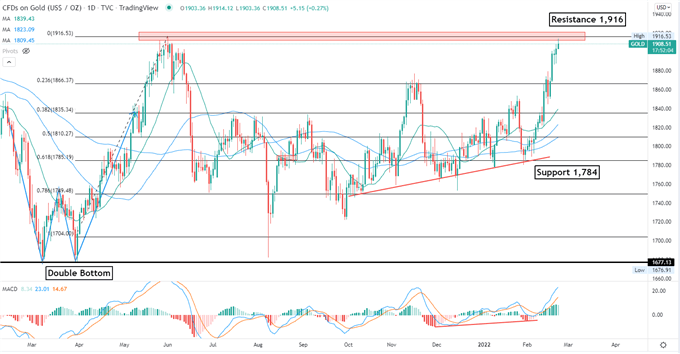