The US, UK, Japan and European allies are due to announce fresh sanctions against Russia in response to an order given by Putin to mobilize Russian troops into the newly recognized Donetsk People’s Republic and Luhansk People’s Republic, otherwise known as the Donbas region.

Putin insisted that the deployment of troops to the area is necessary as a “peacekeeping” effort while the US and its allies have viewed it as a violation of Ukraine’s sovereign borders. The unfolding situation has been the dominant force behind recent market movements and looks set to continue until a diplomatic solution can be achieved.

In general, when markets reach a ‘top’, price action and momentum tends to slow down, consolidate and failed attempts to trade higher are also observed. This seems to be the case with European equities at the moment when viewed from a technical perspective as multiple levels of support have been taken out in recent trading; opening the door to a further collapse.

EU Stocks attempt to recover from yesterday’s sizeable drop. Markets remain reactionary to developments in Ukraine and as such, more volatility can be expected. Price action approached and respected a crucial level of support which coincides with the 2019 peak before the spread of the coronavirus (refer to weekly chart).

Today, the pullback has already moved above 3963 with the zone of resistance (4029 – 4033) in focus. Should the situation in Ukraine intensify, the pullback may simply serve as a opportunity to re-enter the existing downtrend. 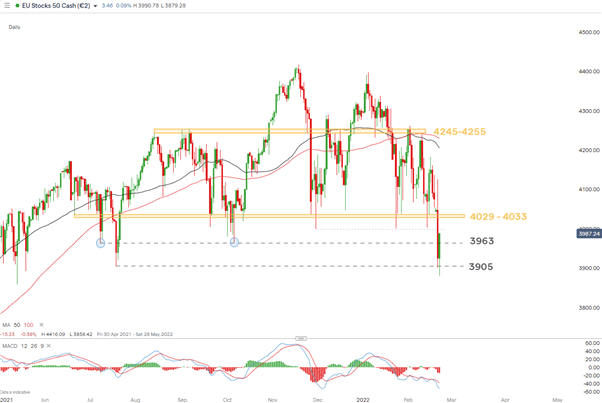 The weekly chart highlights the March 2020 high - which held firm - and the crucial 3607 level of resistance should we witness an acceleration on the current trend of lower highs and lower lows. 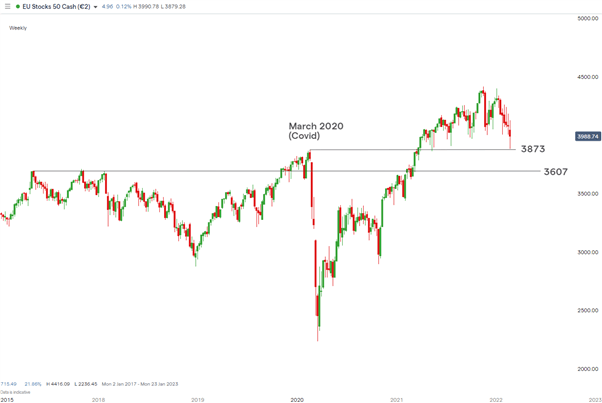 However, the situation for the DAX looks somewhat more advanced than the EU Stocks. By ‘more advanced’ I am referring to the decline and that the DAX has already broken below a crucial zone of support.

The DAX daily chart highlights the important psychological level of 15000 and how price action often dropped to or slightly below this level on a number of occasions. Yesterday’s large move lower, saw price action trade below 15000 as well as the zone of support (14810 – 14840).

A downside continuation remains possible as prices broke below the prior range of sideways movement while a ‘death cross’ has also appeared on IG charts (includes a Sunday candle). Like EU Stocks, the DAX attempts to regain yesterday’s losses however a close below 15000 leaves the index vulnerable to continued selling. 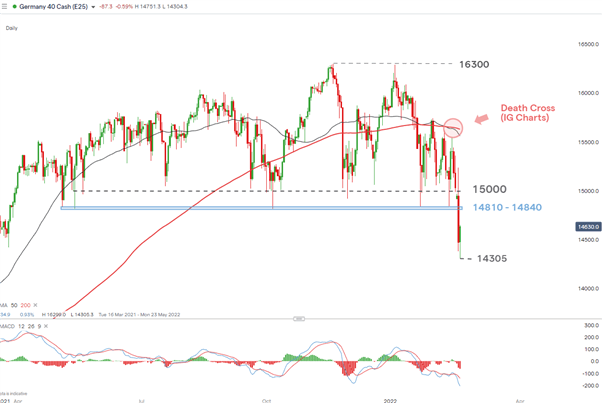 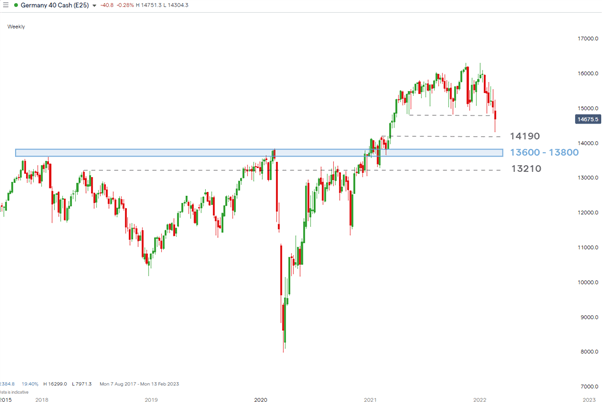