The Dow Jones Industrial Average rebounded on Tuesday as investors shrugged off Russia-Ukraine tensions after Moscow said that some of its troops were returning to their bases. This came after the US warned about an imminent invasion at the end of last week, which resulted in a broad pullback in risk assets. The De-escalation of the Ukraine crisis boosted investor confidence and sent stocks higher overnight, setting a positive tone for Asia-Pacific markets at open. The technology sector (1.90%) outperformed, whereas the energy sector (-1.76%) trailed behind as crude oil prices fell.

Safe-havens, such as the US Dollar, Treasuries and gold declined overnight, showing cooled appetite for anti-risk assets. They still remain in focus as President Joe Biden said the US has yet to verify Moscow’s claim and an invasion remains possible.

Amid a relatively quiet event calendar this week, investors will scrutinize Wednesday’s release of Chinese inflation and US retail sales figures. China CPI and PPI are expected to moderate further to 1.0% and 9.5%, from 1.5% and 10.3% respectively in December. Both readings have fallen from their recent peaks, allowing the PBOC to ease monetary policy to cushion a slowing economy. The central bank injected 300 billion Yuan of liquidity via the issuing of 1-year MLF notes while keeping the interest rate unchanged at 2.85%on Tuesday.

US retail sales growth is expected to hit 2% MoM in January, compared to a decline of 1.9% in December. A stronger-than-expected print may boost investor confidence and strengthen the case for Fed tightening, whereas a weaker figure may lead to the opposite.

Crude oil prices fell 2.8% overnight as eased Ukraine tensions alleviated concerns about potential supply disruption between Russia and the European Union. Energy was the worst-performing sector in the Dow Jones overnight. Oil prices pulled back from 7-year highs but still remain in a strong upward trajectory, underpinned by demand optimism and supply constraints. 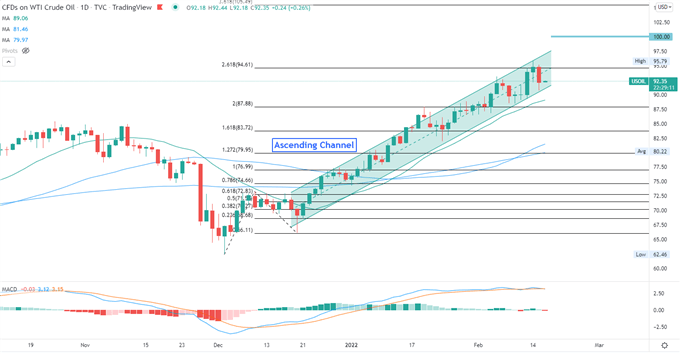 Asia-Pacific markets look set to open higher. Futures in Japan, mainland China, Hong Kong, Australia, Taiwan, Singapore, India, Thailand and Indonesia are in the green. Those in South Korea and Malaysia are in the red.

Looking back to Tuesday’s close, 8 out of 9 Dow Jones sectors ended higher, with 86.7% of the index’s constituents closing in the green. Communication services (+1.94%), information technology (+1.90%) and industrials (+1.77%) were among the best performers, whereas energy (-1.76%) lagged behind. 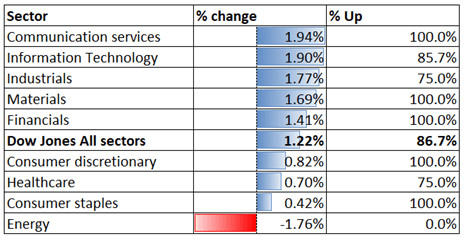 The Dow Jones Industrial Average rebounded from a key support level of 33,830 after the completion of a bearish “Butterfly” chart pattern. Prices have since developed a “Double Top” pattern that indicates a potential bearish trend reversal. An immediate support level can be found at 34,500 – the 78.6% Fibonacci retracement, breaching which may bring 33,830 in sight. The MACD indicator is about to form a bearish crossover beneath the neutral midpoint, suggesting that momentum remains weak. 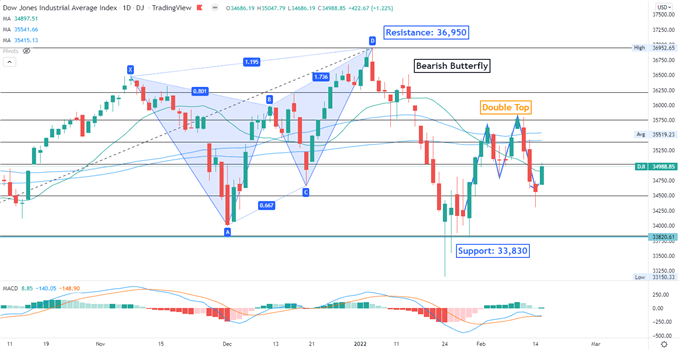 The Nikkei 225 index breached below a “Symmetrical Triangle” pattern and thus opened the door for further downside potential. Prices have rebounded last week, but the overall trend remains bearish-biased. The lower trendline of the “Symmetrical Triangle” has now become immediate resistance. The MACD indicator is trending lower, underscoring bearish momentum. 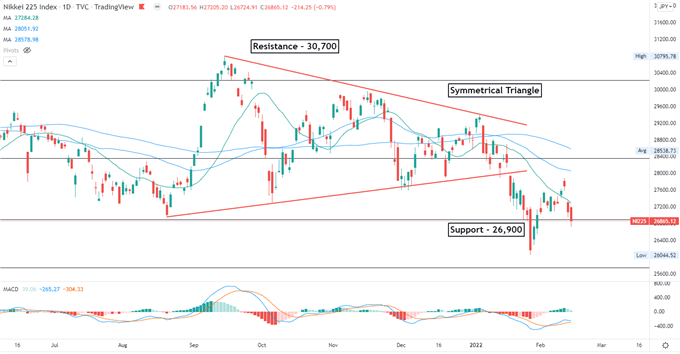 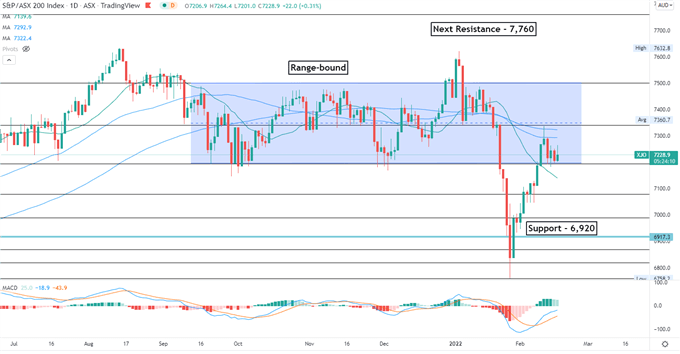