US Dollar Analysis and News

A very hawkish press conference from Chair Powell, perhaps a surprise to some (it was for me), in light of the recent rout we have seen in the last two weeks, in response to tightening financial conditions, which I believed Powell would take note of, allowing for a hawkish disappointment. Instead, we saw the opposite with the Fed Chair unperturbed by recent market volatility, endorsing the tightening of financial conditions.

So a couple of notable comments Powell made yesterday

He was very positive on the labour market, so much so that he stated “there is quite a bit of room to raise rates without dampening employment”

When asked about moving 50bps, the Fed Chair responded by stating that the Fed has not made any decision on the size of rate increases. In other words, not explicitly ruling out a 50bps and thus money markets have priced in 30bps worth of tightening in March. However, for now, I still expect a 25bps rate liftoff.

Elsewhere, the Fed Chair did not rule out a rate hike at every meeting, which in turn has prompted the market to price in near enough 5 rate hikes this year. Very aggressive indeed, emphasising Powell’s uber hawkish presser. The outlook is far from uncertain and will be impacted by upcoming data, which recently soured. Perhaps due to the impact of Omicron, but something to keep an eye out on. Reminder, today will see the release of initial jobless claims, not usually a market mover, but given last week’s sizeable increase (most since mid-July), worth seeing if that was a one-off. 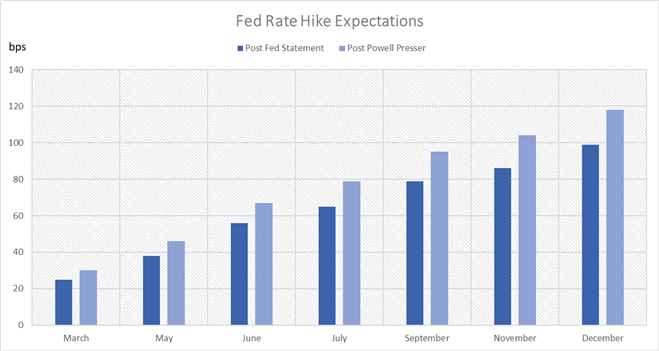 Today is spot month-end (two days before month-end), which is typically associated with USD buying by corporates. Now it's always hard to distinguish whether month-end flows are all that impactful on price action, but it is something to be aware of, particularly in months where the stock market has seen a sizeable move, much like this month.

As such, if a UK portfolio manager holds US Dollar-denominated assets and seeks to hedge FX risk, then a monthly rise in the value of those assets will lead to more dollar hedging (selling the dollar). For example, if equities are FX hedged and US stocks (S&P 500) have risen on the month, while the FTSE 100 (UK stock market) has traded flat, then UK based investors would sell US Dollars against the Pound to add to their hedge, leading to an appreciation in GBP/USD. The greater the outperformance of the US equity market over the UK would be associated with greater selling of the USD against GBP, prompting GBP to rise even higher. Although, extreme moves can often partially revert in the day following the month-end fix. That said, the occurrence of such an event in a market as liquid as FX, suggests that the London fix (month-end fix in particular) is important for FX traders to watch for. (Trading GBP/USD: An Overview of the Pound-Dollar Forex Pair)

This month, the S&P 500 has fallen some 8%, which could prompt sizeable USD buying heading into month-end. As shown in the chart below, months where the S&P 500 has dropped 3% or more (occurring 21 times since the beginning of 2010), EUR/USD has tended to drift lower in the run-up to month end, the largest drop happening at T-2 (today) before reversing losses the following. 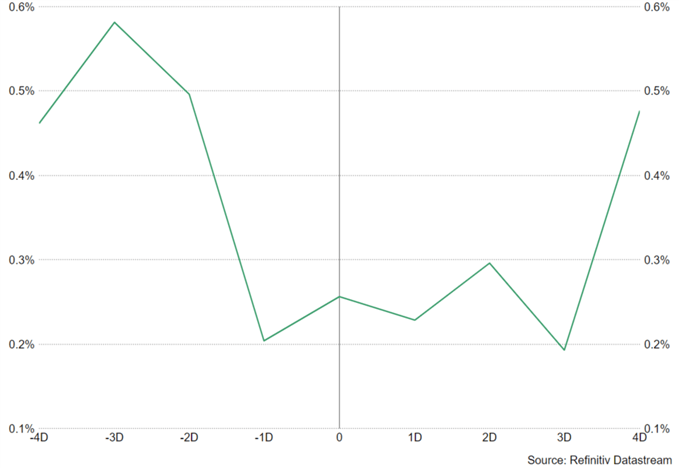