Dow Jones Falls amid Tech Rout, APAC to Trade Cautiously Ahead of the FOMC

The Dow Jones Industrial Average fell modestly on Tuesday amid another volatile session. The tech-heavy Nasdaq 100 index plunged 2.48% as investors continued to rotate out of the comparatively more expensive growth stocks into value names, in anticipation of a rate-hike cycle to be kicked off as soon as in March. Investors are probably reshuffling their portfolios into a more defensive setup, letting go pandemic winners. While the Dow Jones has fallen 5.5% over the last two weeks, the Nasdaq 100 has plunged over 11%. This may set a sour tone for Asia-Pacific markets at open.

US equity futures seesawed during the after-hour trade. Microsoft disappointed investors with slower growth in its cloud business, even though it topped analysts’ expectations on the top and bottom line. The company’s earnings per share (EPS) came in at $2.48, compared to $2.31 estimate. Its revenue came in at $51.73 billion, versus $50.88 estimate. Microsoft’s share price plunged 4% before paring losses during the extended session.

Asia-Pacific markets were hit by surging volatility on Wall Street and rising geopolitical tensions between Russia and Ukraine. Major indices such as Nikkei 225, Hang Seng Index and ASX 200 index tumbled 1.7%, 1.67% and 2.5%respectively on Tuesday, extending their losing streak. Market sentiment has tilted to the cautious side, with investors bracing for the FOMC meeting later this evening. With inflation running high and commodity prices edging up, markets may be expecting the Fed to tighten policy sooner and quicker. 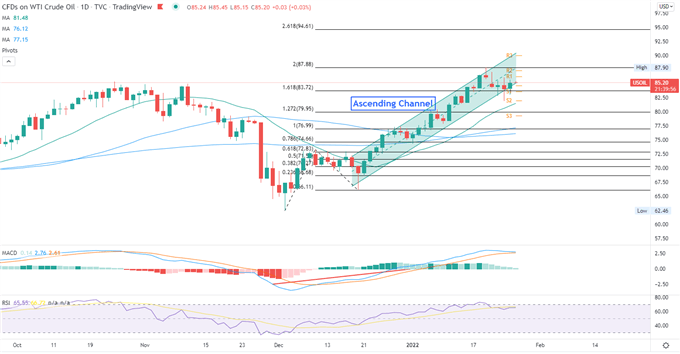 Asia-Pacific markets look set to open mixed. Futures in Japan, Hong Kong, Australia, Thailand and Indonesia are in the green. Those in mainland China, South Korea, Taiwan, Malaysia and India are in the red.

Singapore’s MAS unexpectedly tightened monetarypolicy on Tuesday to contain rising price levels. The central bank usually adjusts policy twice a year, in April and October respectively. An off-cycle move underscores the urgency to act as it foresees inflationary risks in the months to come, which may add into wage pressures and weigh on domestic consumption. The Singapore Dollar strengthened against its major counterparts, and this rally could set to continue. Click here to read more.

Looking ahead, the FOMC meeting and press conference dominate the economic docket alongside BoC interest rate decision. Find out more from the DailyFX calendar. 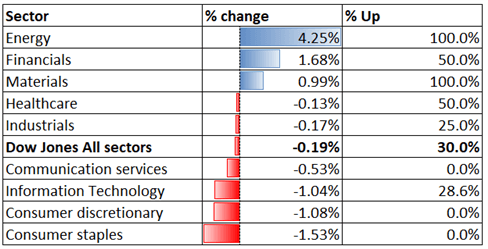 The Dow Jones Industrial Average has likely formed a bearish “Butterfly” chart pattern and has since entered a technical correction. Prices have fallen sharply since last week, testing an immediate support level at 33,830 – the previous low seen in October. The MACD indicator has formed a bearish crossover and trended lower, underscoring downward momentum. The RSI oscillator is hitting the oversold threshold, suggesting that a technical rebound is likely in the days to come. 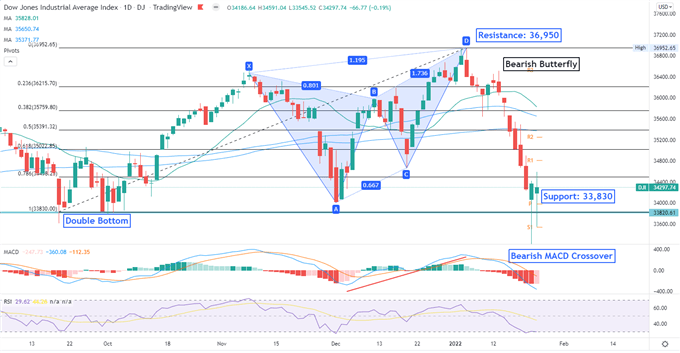 The Nikkei 225 index breached below a “Symmetrical Triangle” pattern and thus opened the door for further losses. This suggests that prices are heading south after a few months of consolidation. An immediate support can be found at around 26,900 – the previous low in August 2021. The MACD indicator formed a bearish crossover and trended lower, suggesting that near-term momentum remains weak. 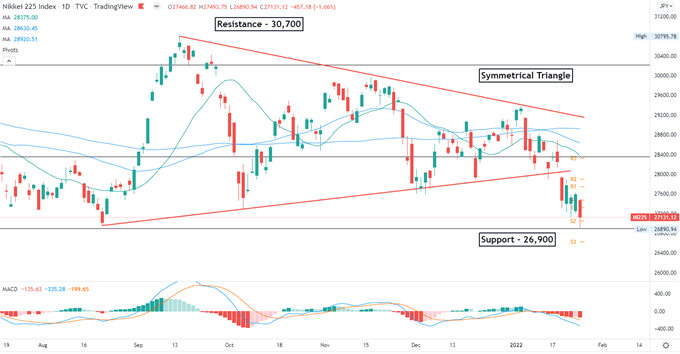 The ASX 200 index breached below the floor of a range-bound zone between 7,200 to 7,500, exposing the next support level of 6,920 – the 61.8% Fibonacci extension. There are two large bearish candlesticks formed over the past three sessions, suggesting that bearish power is in control. The MACD indicator formed a bearish crossover and trended lower, underscoring bearish momentum. The RSI indicator is piercing into the oversold territory, suggesting that a technical rebound is possible in the days to come. 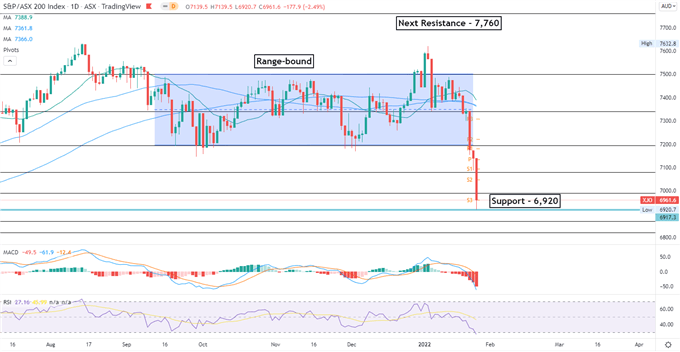