Nasdaq 100 Recovers from 5% Decline to Finish in Positive Territory

The Nasdaq 100 Index managed to erase a roughly 5% decline during Monday’s session to close in the green, the first time such a reversal has taken place since the aftermath of the financial crisis. Tech shares pulled the major benchmarks lower as investors rushed to safety to start a major week for markets. The 2-year Treasury yield, often seen as a direct gauge of Fed monetary policy, fell back below 1% while the US Dollar Index traded back above 96. Headlines out of Eastern Europe turned the tide overnight, as uncertainty continues to mount surrounding the Russia-Ukraine conflict.

While tech shares led markets lower in the morning, they also fueled the late afternoon rebound into positive territory. Nasdaq 100 constituents have been cast aside of late as investors opt for companies with established cash flows, as the Federal Reserve inches closer to ending pandemic aid and raising interest rates.

The change of sentiment surrounding the pace of potential Fed tightening has driven the recent equity pullback, as speculative tech valuations tend to struggle in rising rate environments. The vicious selling during Monday’s session saw the Volatility Index (VIX) print above 38, the first time this level has been breached since November 2020. Market participants may remain on edge, with the FOMC policy meeting hanging in the balance on Wednesday. 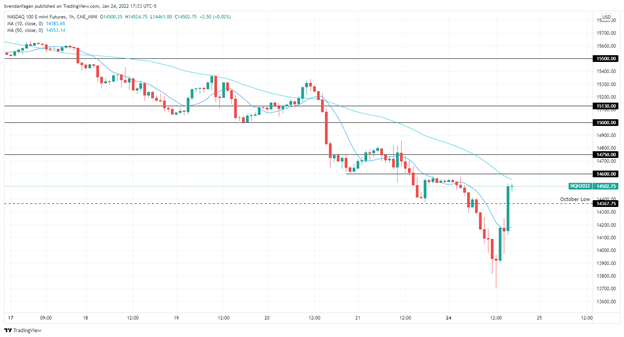 From the opening bell, Nasdaq 100 futures (NQ) continued to race lower. Selling in the premarket session saw NQ rip through the October lows without a second thought. By the opening bell in New York, NQ had traded back below 14,200. Sellers found no issue with cutting through support at the psychological 14,000 level and ultimately ushered in a move roughly 300 points lower. From 13,700, price pushed higher, cruelly punishing those who may have turned bearish during the morning session.

Bulls were ruthless all throughout the afternoon, retaking level after level that had been lost during the morning session. Not only did bulls recapture the October lows, but they managed to close in the green by roughly 0.50%. It is often said that some of the biggest rallies come during bear markets, so much remains to be seen whether this represents a bottom or very a cruel trap. 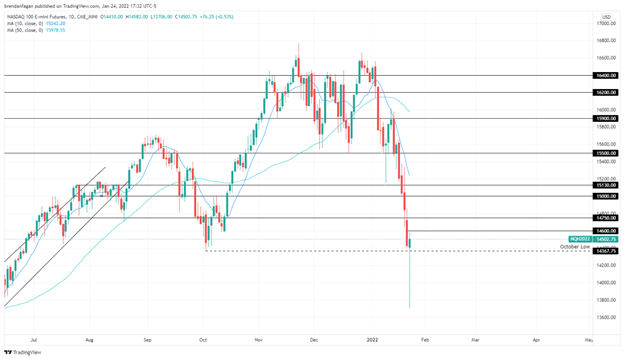 Should bulls continue to reign supreme during Tuesday’s session, a revisit of 14,600 may be on the cards. Clear and concise direction remains hard to come by, as many market participants may remain tepid in the face of the Fed meeting and burgeoning geopolitical risk. Any break of 14,600 could possibly see a retest of 14,750 in the near-term.

Should the support around the October lows give way again, traders could be in for more swift price action to the downside. As seen during Monday’s session, there is little in the form of support for prices below the October lows, which could invite more volatile price action.