After a poor showing on the services front since late October last year due to COVID-19 restrictions around the Omicron variant, PMI’s have extended their decline across the board (see calendar below). Both manufacturing and services have come short reflecting the knock-on effect from Omicron and its associated restrictive measures. This being said, a print above 50 keeps both sectors in expansionary territory.

The pound has been grappling with many moving parts of recent including:

1. Geopolitical tensions – The Russia-Ukraine spat has left investors erring on the side of caution in terms of risk sentiment leaving a tough road ahead for GBP bulls.

2. Partygate – Ethics Chief Sue Gray who has been tasked with the official inquiry into the alleged protocol break by Boris Johnson, is rumored to have received what the media label “extremely damning” evidence according to sources. Another potential headwind for the pound depending on consequent actions by Mr. Johnson. 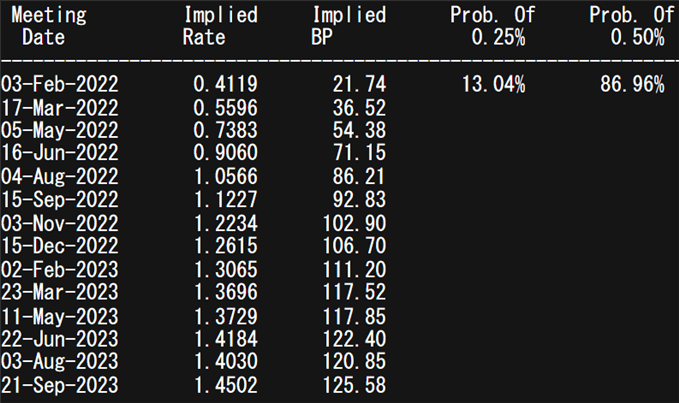 4. Brexit – Freight woes post-Brexit have shown trade statistics from major ports decline by 30% however, trade talks between India and the UK may be a shining light for the pound.

5. FOMC – The Federal Reserve rates decision later this week stands out on the economic calendar with many analysts expecting a hawkish disappointment should the QE program be concluded, which may dampen rate hike expectations and weaken the U.S. dollar. 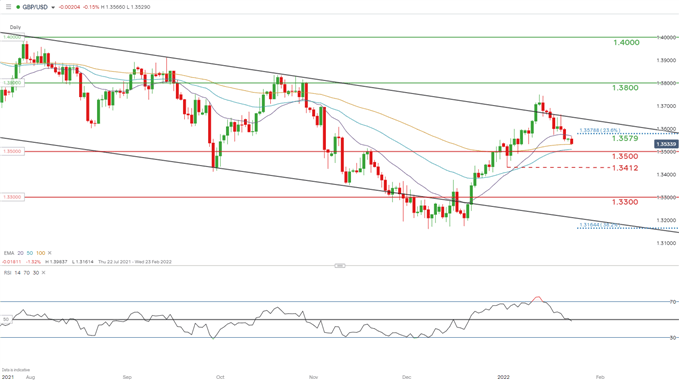 The daily GBP/USD chart above shows the pair coming off it’s 2022 highs in mid-January, with price action trading within the longer-term downward channel (black). Today, support has been found at the 100-day EMA (yellow) marker sandwiched between the 1.3500 psychological handle and 1.3579 (23.6% Fibonacci) respectively. UK 10-year Gilts have slipped since last week and now sitting at 1.121 and weighing down on sterling.

IG Client Sentiment Data (IGCS) shows retail traders are currently marginally short on GBP/USD, with 48% of traders currently holding short positions (as of this writing). At DailyFX we typically take a contrarian view to crowd sentiment however, the negligible split between net longs and shorts leaves a neutral disposition.