Yesterday’s headline CPI print of 7%, which was in line with forecasts, disappointed markets and led to a rather large drop in the dollar which has continued into the London AM session today.

Typically, the hottest inflation print in nearly 40 years would likely result in a higher dollar price due to increased expectations of faster interest rate hikes and higher bond yields. This time around, markets had already priced in a significantly more hawkish Fed response, setting the bar for upside potential rather high, opening the door open for disappointment.

Major Risk Events for the Next 7 Days

Today sees a slew of Fed speeches with: Harker, Brainard and Evans speaking in public with December US PPI due for release at 13:30 GMT. Tomorrow we have US retail sales data for the December Christmas period and preliminary consumer sentiment data out of the University of Michigan for January.

SA specific data remains light until the 18th and 19th of January when mining data and December inflation figures are due; with the first central bank meeting of the year concluding on the 27th. 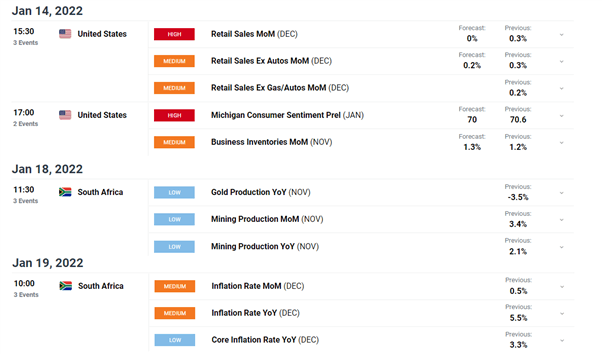 The nearer-term downtrend unfolds within the context of a larger ascending channel meaning that USD/ZAR may soon begin to climb higher. Much of that narrative depends on how the US dollar unfolds towards the end of the ween and possibly even the start of next week as there is currently little sign of the dollar (via the US dollar Basket ‘DXY’) finding a floor.

Near term support comes in at 15.25 which happens to be significant as it roughly coincides with the shorter-term trendline support. A breakdown of this level sees a rather clear an unobstructed path towards the psychological level of 15.00

Should we start to see momentum fade around the 15.25 level and a bounce off trendline support, USD/ZAR bulls may focus on the 15.38/40 level as an early indication of a bullish continuation. Thereafter, 15.57 and 15.70 can be identified as the nearest hurdles to overcome should the dollar recoup some of its recent losses. 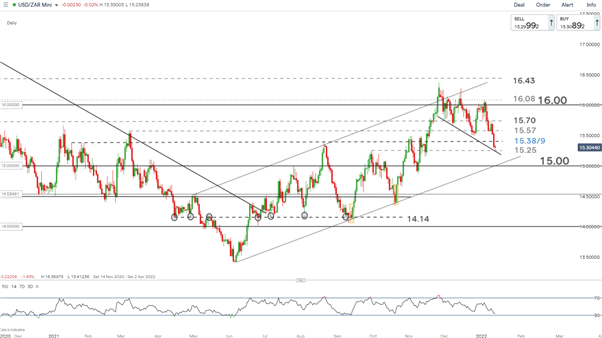