The Euro is making headway against the US Dollar this week, with EUR/USD rising to the highest level since November 15 after breaking out of a multi-week period of consolidation. The move comes as somewhat of a surprise for currency traders following a red hot US inflation report that showed prices in the United States rose at the fastest pace in decades and an increasingly hawkish Federal Reserve.

Traders appear to have moved too aggressively to price in those hawkish bets into the US Dollar, however. That left an avenue of attack open for the single currency, which saw its own respectively high inflation report last week. Before that report, expectations for the European Central Bank (ECB) were rather dovish, at least compared to most of its global peers, excluding the Bank of Japan. When a central bank is forecasted to raise rates – the ECB in this case – its issued currency benefits through a mechanism known as the interest rate differential (IRD). That is because higher rates promote investment and attract foreign capital flows.

While both the United States and the Eurozone are seeing high and sustained inflation, rate traders have just begun to up their bets over a tightening in ECB policy. The first ECB rate hike in over a decade now looks to be not only possible but probable. Overnight index swaps (OIS) are showing a 10 bps hike is fully priced in by the end of the year. While that will still leave Europe with a negative benchmark rate, it still inspires some confidence moving forward.

Rising bond yields across Europe reflect the outlook on tightening monetary policy, and a growing swath of analysts expects the Eurozone’s growth to accelerate this year, possibly outperforming the United States. The relatively lofty Treasury yields may help European equities outperform as well. Italian and Greek 10-year government bond yields – some of the riskiest debt in Europe – are offering yields just below their Treasury counterpart. Meanwhile, the negative German 10-year Bund yield is close to going positive. Altogether, the fundamental backdrop for the Euro looks bright. 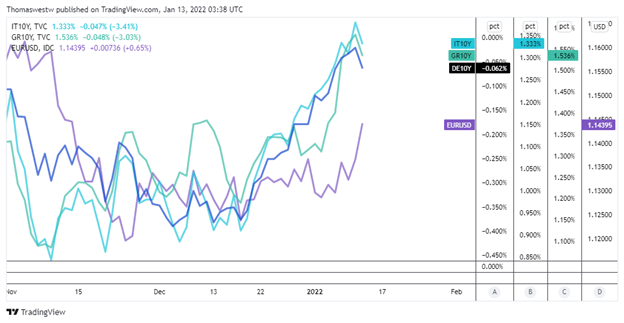 EUR/USD broke higher from an Ascending Triangle pattern and a descending trendline from the September swing high. The 38.2% Fibonacci retracement that offered confluent resistance was breached as well. The MACD and RSI oscillators are showing bullish momentum, with prices now aiming at the 61.8% Fib level and the descending 100-day Simple Moving Average (SMA). A reversal would seek support at former triangle resistance. 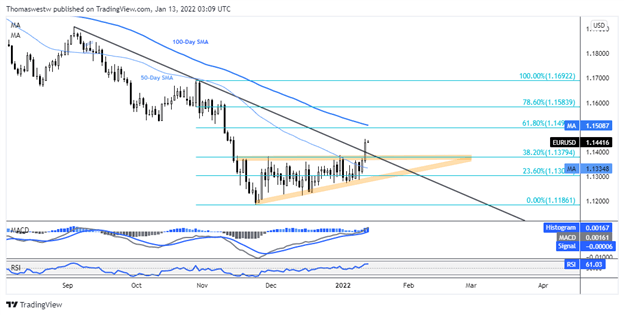