US equities broadly advanced on Tuesday as sentiment remains rosy with the corporate earnings season in full swing. Earnings continue to be strong despite lingering fears regarding supply chain issues and inflation. Despite finishing Tuesday’s session in the green, all major US indices closed well off of session highs. The afternoon retreat saw the Nasdaq 100 Index come to rest on trendline support, a level that has mostly held throughout October. 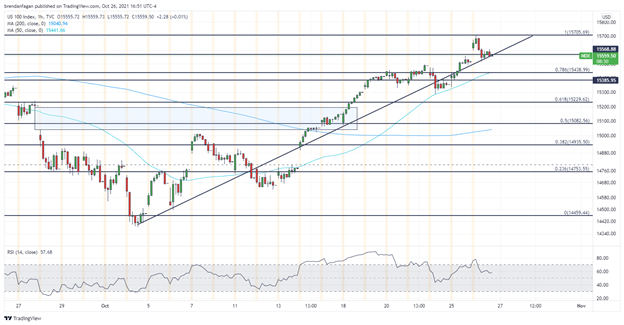 Twitter’s quarterly results were massively impacted by a “one-time litigation charge” of over $760 million, which relates to a settlement the company reached over misleading investors about growth metrics. Twitter also noted that the impact of Apple’s recent iOS privacy change was smaller than expected, as Snapchat and Facebook both cited the changes as the main disruptions during the most recent quarter.

Microsoft shares gained in the afterhours session as the company exceeded analyst estimates for the first quarter. Company revenue grew 22% year over year, the highest rate of growth since 2018. Despite robust growth from Azure and other cloud services, management highlighted that global chip shortages had a material impact on sales of Windows software to device manufacturers.

Google also reported a blowout quarter after the bell, as advertising revenue rose 43% from the same period last year. YouTube ad revenue rose to $7.21 billion from $5.04 billion last year. Despite the strong report, shares dipped slightly in the afterhours session. Unlike other tech peers, Google’s ownership of the Android OS appears to have insulated the company from the fallout relating to Apple’s recent iOS privacy changes.