USD: The question for the USD is whether there is more to go in the long USD squeeze. To my surprise, the USD failed to hold onto gains stemming from Chair Powell’s heightened concerns over rising inflation. However, a hold above support at 93.40-50 is encouraging for USD bulls. However, with equities remaining stable, safe-havens such as the USD remain out of favour.

EUR: The key area for the Euro is the former YTD low at 1.1664, which has on multiple occasions curbed strength in the currency. Therefore, if we were to look for another leg higher in the Euro, this area of resistance would need to be cleared. A reminder this week that we will see the latest ECB meeting and in light of the aggressive repricing in front-end rates, it is expected that the ECB will push back on money markets pricing in ECB tightening next year. 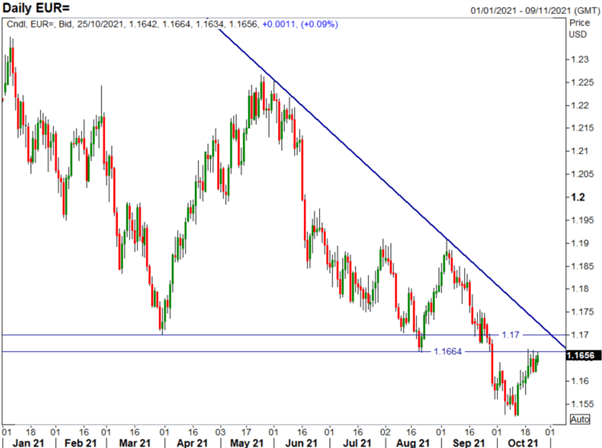 GBP: Shifts in money market pricing continue to dictate price action in the Pound, alongside the recent rise in political tensions between the UK and EU over the Northern Ireland protocol, also add in an element of uncertainty. Late on Friday’s session, reports had noted that the EU was reportedly mulling the termination of the Brexit trade deal if rifts with the UK deepen, additionally, the EU told the UK that British legal texts cannot be a legal basis for talks. However, while this sparked a mild bit of pressure for GBP, weekend reports that the first round of new talks was constructive have somewhat soothed concerns of rising political tensions for now. On the tech front, short-term resistance resides at 1.3800 with 1.3830 above.

Today will see commentary from the typically dovish Tenreyro (1400BST) and keep in mind that the rate-setter recently stated that a rate rise in the face of supply-side disruptions would be self-defeating. However, should Tenreyro signal a more openness to tighter policy in the form of rate hikes, this would likely underpin the Pound.

CAD: The main focus this week for the Loonie will be on the upcoming Bank of Canada rate decision. The current economic outlook for Canada is encouraging with the labour market remaining robust having bounced back to pre-Covid levels. Meanwhile, the average core inflation measures looked at by the Bank have continued to edge higher above their target and with oil prices continuing to trend higher, this would suggest that the re-pricing in BoC tightening bets is more than appropriate. A reminder that the BoC’s current guidance suggests the output gap is likely to be closed by H2 2022, however, this is likely to be revised to H1 2022 and therefore signal an earlier rate lift-off. That said, with 35bps worth of tightening priced in by April, there is room for disappointment and thus put the Loonie at risk of a pullback.