The South African Rand posted one of the most impressive performances out of the emerging market (EM) currencies versus the US dollar but has seen this slide in recent weeks.

The Rand actually trades around -0.3% against the dollar year-to-date and a weaker dollar may help the ZAR trade back in positive territory even if the dollar weakness turns out to be rather short-term in nature.

Global Currencies vs the USD

The dollar is currently fraught with uncertainty as US inflation remains elevated while at the same time retail sales data is expected to be negative for September. The sluggishness of the labor market further reinforces the uneven economic recovery as only 194k jobs were added in September versus expectations of 500k – at a time when the Federal Reserve is looking for reasons to trim its stimulus spending program.

Tomorrow ushers in US Retail Sales data for September as well as the first reading of the Michigan Consumer Sentiment. Disappointing data prints may not matter too much here as the main focus remains on inflation, the labor market and the changing probabilities of a taper.

Net importers of oil within the emerging market space have been experiencing a tough time of late as both the price of oil and a stronger dollar continues to weigh on consumers and local economic recoveries.

The recent dollar weakness is unlikely to make and drastic difference at South African fuel pumps as a much larger and more sustained pullback is required. The chart below depicts the dollar versus a basket of major currencies which typically acts as a benchmark for USD performance.

There has been a recent break of a sharp move higher which may eventually settle at 9345 (around the previous high) but remains vulnerable to a bullish continuation as the current market sentiment sides with some form of tapering before year-end or confirmation of tapering early next year. 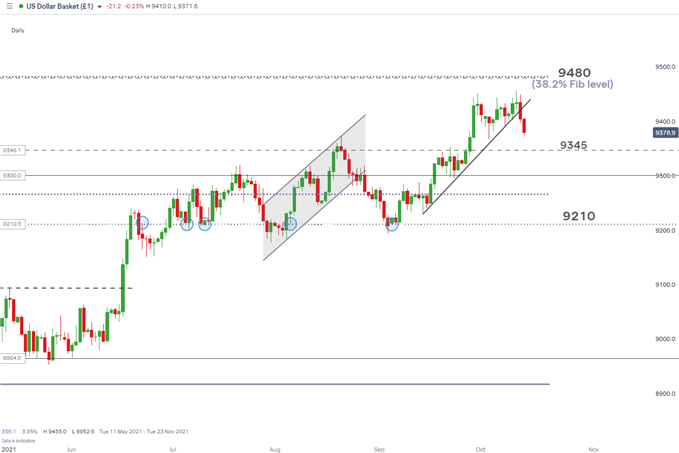 The ZAR has strengthened significantly since the September high around 15.25 as price action approaches numerous levels of support and currently wrestles with the 14.73 level. Continued ZAR strength would then witness a test of the 14.63 level, which is the 38.2% Fib of the bullish reversal from the June low to August high.

However, price action reveals what looks like a bull flag, suggesting ZAR vulnerability and a move towards 15.00 once more. For the bullish narrative to hold, there would need to be a definitive bounce from the lower band of the bull flag and the zone of support (red) and a break above 15.00 and the bull flag, with continued momentum. 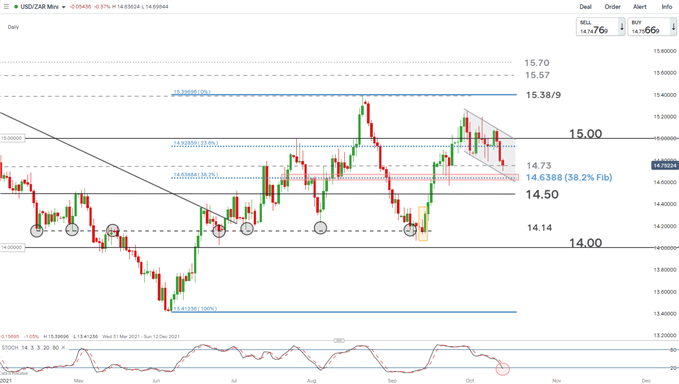