Turning a Corner: A lot of the narratives that have played their part in weighing on market sentiment over the last few weeks, during a seasonally soft period are beginning to ease. This includes the likes of soaring gas prices, which thanks to Putin have seen a sizeable pullback from the recent highs. To add to this, while concerns surrounding the indebted property developer, Evergrande, will remain, investor angst has subsided amid the lack of newsflow. Alongside this, with the reversal in China-US shippings rates, this would imply that supply chain disruptions are coming to an end. That said, this is now coming at a time where equities tend to bottom out after the late September to early October slide, and yes, I’m aware that past performance does not provide a signal for future performance. However, as I mentioned above, given that the mood music is improving, this increases my confidence in potential seasonal factors.

Although, what I will say is keep a watchful eye on US yields as the US 10yr edges ever so closer to the June peak. Should we see a breakout above 1.60%, this will not favour tech stocks, which in turn would raise the likelihood that tech stocks could lead the way lower. 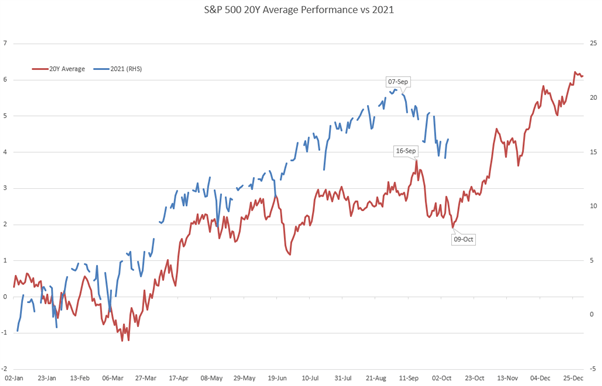 EUR/CHF:As I noted on Tuesday, EUR/CHF had grabbed my attention as the cross moved towards the 1.0700 handle. Arguably a soft line in the sand, which yet again has been defended. Given my current view that risk appetite will stabilise, this will likely bode well for EUR/CHF in the short run and thus expect 1.0700 to continue to curb downside. 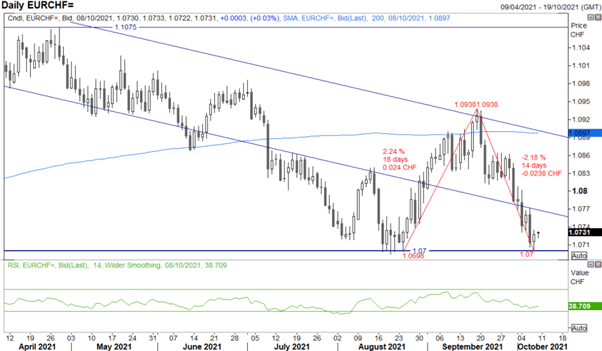 Does NFP Matter for FX?

NFP day, but the question is, does it really matter for FX markets now that the Federal Reserve has signalled that a November taper is a done deal. Keep in mind, that at the prior Fed meeting, Chair Powell that a decent jobs report will do, which in turn takes the excitement out of today’s release and unless we see a shocking figure showing job losses for September, I doubt today’s release will move the needle for the Fed.

Taking a look at the market reaction to the ADP report, we saw that after the Fed provided a hawkish pivot in June, FX markets had become increasingly sensitive to the data as markets attempted to gauge the timing of the taper announcement. Now that Fed has largely confirmed as much, this week’s release failed to light any volatility sparks for FX. Instead, I will be keeping a closer eye on the fixed income space. 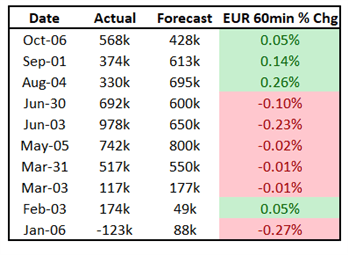 As equities begin to stabilise and with Chinese data firming again, as evidenced by the strong Caixin PMI overnight (53.4 vs 50.7 Exp.), the Australian Dollar could be readying for a breakout. To add to this, China is also turning towards Australian coal in order to ease the current national power crunch amid a coal shortage. A factor that will likely bode well for the Aussie.

On the tech side, pivotal resistance at 0.7300-0.7320 stands in its way, the same with AUD/CHF at 0.6800. Alongside this, and as I have mentioned before, CFTC positioning data shows that speculators hold a record short in the currency. Therefore, should today’s NFP release prompt a bid in the greenback, I favour fading any dips in AUD/USD from 0.7220. 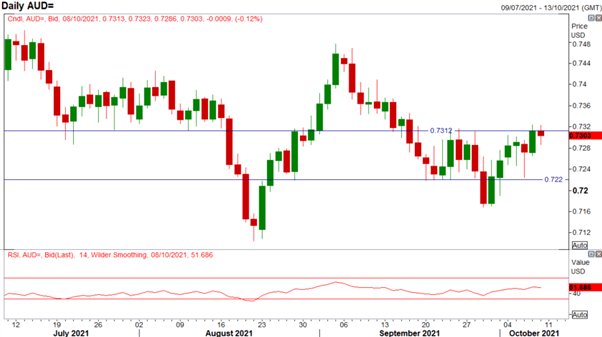