Natural Gas Prices Continue to Soar in the US, Asia and Europe – How Far Can it Go?

Inflation and rising commodity prices in general have been hot topics during the latter half of 2021. Rising oil and natural gas prices have been thrust into the mix and threaten the pace of the global recovery as higher electricity/fuel costs filter their way down to the consumer via higher prices.

Colder than expected weather earlier this year helped kickstart price increases in natural gas. Weather is a key component when forecasting gas demand and supply so anything outside of the anticipated range can result in knock-on effects to other regional LNG prices.

Furthermore, Europe’s drive for cleaner, sustainable energy prompted the use of wind turbines which witnessed a setback due to the lack of wind. This, along with numerous nuclear outages reduced the effectiveness of alternative energy solutions and only added to the existing demand for natural gas as the inconvenient substitute.

In the current financial landscape you would be forgiven for thinking the below chart corresponds to some cryptocurrency or meme stock due to its parabolic rise. However, this is Europe’s gas price reference based of the Dutch TTF price. 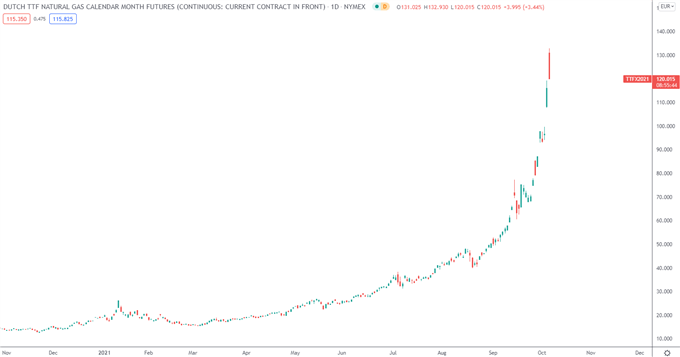 The UK, while currently experiencing queues at filling stations, are also exposed to rising natural gas prices as households require it for heating, especially ahead of winter.

Asia has also witnessed rising natural gas prices which have been partially offset by a stronger Yuan, in China’s case as they are reportedly stocking up ahead of the colder months ahead.

US natural gas futures jumped to its highest settlement price ($6.312) since 2008 as the US also experiences stock shortages.

US storage supplies have been under pressure as a result of increased demand and reduced output during the hurricane season.

Storage figures are also below the 5 year average and declining. Stock piling is likely to increase as the US heads into winter despite no indication of colder than normal temperatures. 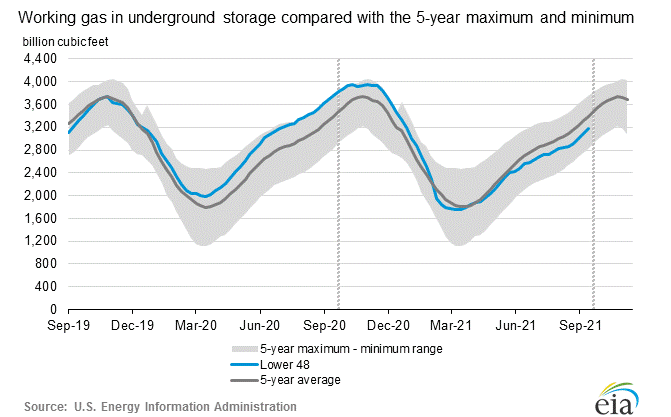 The forward curve provides some insight into future price expectations as further price increases are priced in before normalizing as the Northern Hemisphere heads into warmer seasons.

The natural gas price chart (weekly) puts the recent run into perspective. These elevated prices aren’t anywhere near the all-time high but are near the upper bound of average prices over the last decade. A continued move above the 6464 level may see further elevated prices especially as the colder weather begins to set in. 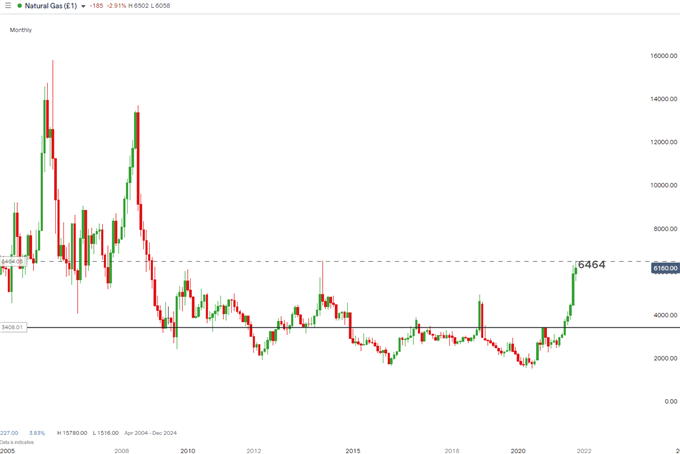 Risk Events on the Horizon for Natural Gas

Tomorrow we will see the updated US storage figures by the US Energy Information Administration (EIA).