The Australian Dollar took a hit after a downbeat jobs report revealed the economy lost a massive 146.3k jobs in August, relative to the -80.0k Bloomberg consensus forecast. The unemployment rate ticked down to a percentage point to 4.5% against an expected 5.0%. A drop in the labor force participation rate likely pushed the jobless rate lower despite fewer employed citizens.

A wave of lockdowns, mostly across New South Wales (NSW) and Victoria, are the likely culprits fueling the big employment losses. AUD/USD was benefiting from a bout of risk-taking before the data print but appears to be tracking slightly lower in response to the headline figures. Some economists are expecting growth to contract in the third quarter due to the expansive Covid-related restriction measures.

Earlier this week, Reserve Bank of Australia (RBA) Governor Philip Lowe stepped in line with that view. The RBA chief stated that he expects the Q3 contraction to be 2% or larger, along with a jobless rate in the high 5% range. This employment report bolsters Mr. Lowe’s growth contraction hypothesis. While the market is pricing in a rate hike in 2023, Mr. Lowe said 2024 will likely be the liftoff point. The faraway target relative to other more hawkish central banks is another headwind for the Aussie Dollar.

Still, as vaccination rates increase, a comeback in the fourth quarter may be on the cards. Australian policymakers have pushed hard to amp up the country’s vaccination campaign. The government is targeting an 80% vaccination rate for those 16 and over by December. Travel restrictions and lockdown measures will be largely pulled back at that time under the current plan. If pent-up demand is stronger than expected, it may help spur some more aggressive rate bets for the RBA. Until then, however, the Australian Dollar’s path of least resistance appears to be lower.

The Australian Dollar’s technical posture versus the Greenback seems more positive than its fundamental outlook. The rising 20-day Simple Moving Average (SMA) has underpinned prices on a move lower through the last week. A Falling Wedge pattern has taken shape, which suggests a bullish bias. A move above the pattern’s resistance level may lead to a breakout. 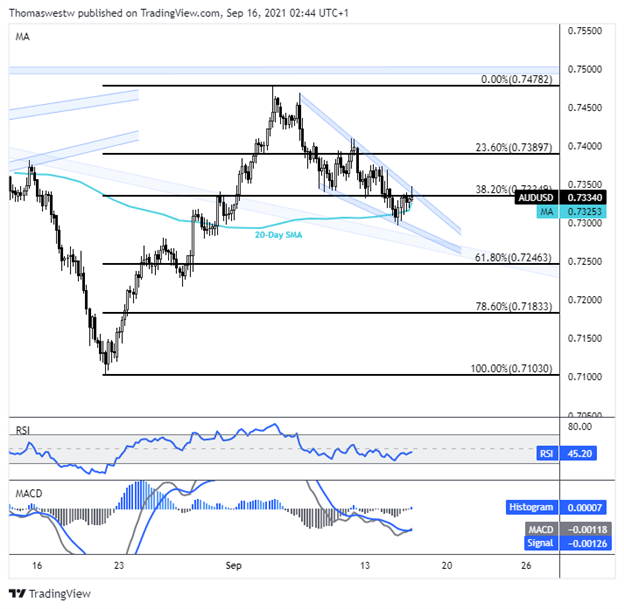