The US Federal Government posted a deficit of $170.6 billion in August, as relief programs created at the height of the pandemic started to unwind. Despite narrowing deficits, concerns remain as Washington inches closer to the October deadline to take action on the debt ceiling. On a year-over-year basis, the deficit narrowed by 14.7%. The significant spending on the part of the government reflects ongoing support to households during a time of severe economic stress. The US Dollar traded lower following the opening bell in New York after strong gains in the overnight session. The Greenback weakness mirrored the decline in the 10-year Treasury yield, as risk assets largely declined while bonds advanced. 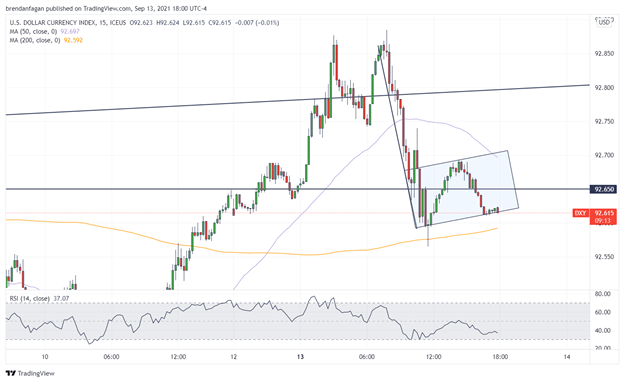 Government revenues totaled $3.39 trillion for the first 11 months of the fiscal year, fueled by a economic reopening that saw millions of Americans return to work. The growth rate of government spending also slowed, as pandemic-related programs began to end. Despite the optimism surrounding the US recovery, fears remain as the October debt ceiling continues to linger over Congress. In a recent letter to Capitol Hill, Treasury Secretary Janet Yellen explained that current “extraordinary measures” being used to prevent the government from hitting its borrowing limit will expire very soon.

As Congress continues to battle over a stop-gap spending bill, the debate rages on over President Biden’s $3.5 trillion spending plan. The key legislative battle took a sudden turn as Senator Joe Manchin revealed his desire for a bill in the range of $1.5 trillion. With Washington locked in a grudge match over infrastructure and reconciliation, the October 1 deadline for the debt ceiling looms ever larger. The potential fallout of a US default could be catastrophic for financial markets and the broader economy. In the coming weeks, we may see some congressional leaders begin to budge on hardline stances as the deadline nears.