SA GDP data for the second quarter has garnered significant attention as market participants wait to see the effects of last month’s civil unrest and looting which caused damages estimated to be around R35 billion. Estimates suggest that the economy will have expanded by 2% from last quarter and by 17.5% compared to Q2 2020.

Earlier today consumer confidence data improved slightly in anticipation of Q3 with a reading of -10, up from the previous -13. The survey creates a reading between 100 (extreme optimism) to -100 (extreme lack of confidence) with 0 being considered neutral.

While Q2 GDP data is likely to result in elevated levels of volatility especially after the US holiday on Monday, the main longer term drivers for the pair include: the interest rate differential, the Delta variant, global risk appetite, commodity prices and Fed policy.

The Rand continued to make gains against the dollar today as the USD/ZAR looks to a rather significant level of support around the 14.14 level which proved to be a stern level of support in June and July this year with another failed test of this level in August. The 14.00 psychological level remains a possibility in the lead up to the 22 September FOMC meeting.

Focus on the remaining 3 FOMC meetings before year-end will only intensify as the committee contemplates the appropriate time to start reducing stimulus. Fed Chairman, Jerome Powell mentioned at the Jackson Hole Economic Symposium that the central bank is likely to begin tapering before the end of the year so it remains to be seen when exactly that will be.

The longer-term implications of all this is that the Rand may experience relative depreciation against the US dollar and other majors as an effort to reduce stimulus is the step before the inevitable interest rate hikes. The US dollar is considered one of the safest currencies and if that safety comes with an increased incentive (higher interest rate), that could very well see a sell-off in riskier, high yielding emerging market currencies in favor of the more attractive dollar. 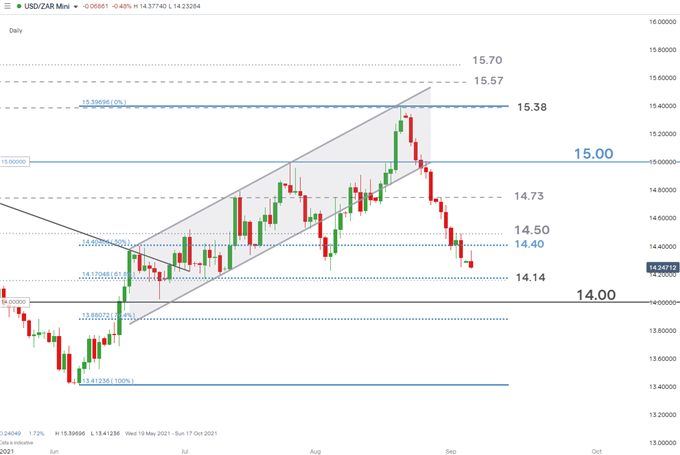 Therefore, near-term support targets are clearly-defined as the risk of a potential bottom increases with each FOMC meeting heading into year-end. Levels of resistance currently stand at 14.40 (50% Fib) and the psychological 14.50 level.