AUD/USD Moving From One Extreme to the Next, a Classic Case of Trading NFP

From One Extreme to the Next

Selling in the greenback has been the dominant trend across the FX space since Chair Powell’s speech, while a slew of soft labour market prints (ADP + ISM Employment Index) have also exacerbated the move. However, as I have previously noted, with market participants somewhat positioned for a softer than expected NFP report, this would subsequently lower the bar for an upward surprise in today’s release. That’s not to say that the NFP report will print above expectations, but it does say traders are likely to be short dollars into the release.

Elsewhere, and to my surprise the Australian Dollar has been impervious to the persistent weak data releases out of China. Admittedly domestic data has been firmer, however, the relevance for Q2 growth is somewhat diminished given that Q3 has been impacted by lockdown measures and thus likely to show a contraction in GDP. That said, risk sentiment has remained as buoyant as ever with US indices continuing to hit fresh record highs, keeping the Aussie underpinned, alongside other high beta currencies. Although, the particular outperformance in the currency is perhaps also due to the fact at how oversold the AUD had been in recent weeks, moving from one extreme on the downside to the next extreme (Figure 1). With that in mind, while the NFP report will stoke volatility in the pair, I suspect this corrective rally has little left in the tank to extend higher. 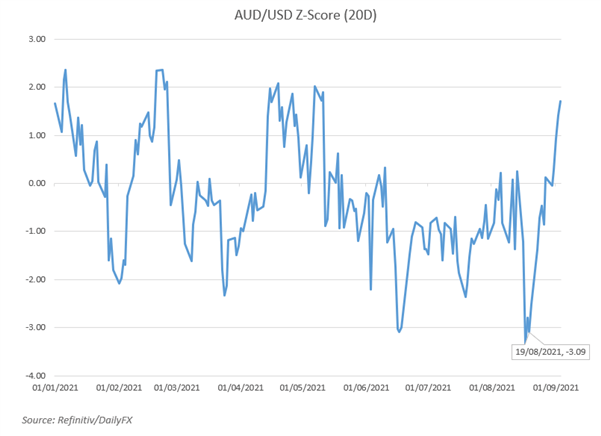 Looking ahead to next week, the main focus for the Aussie will be the RBA monetary policy, whereby the consensus is looking for the central bank to delay its decision to cut the pace of asset purchases to A$4bln/ week from $5bln/week amid the deteriorating Covid backdrop as cases hit record levels. 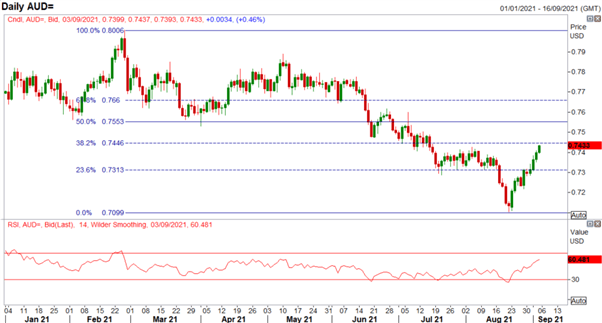 A Classic Case of Trading NFP

With a lot of attention on the NFP figure once again, I thought I’d take a look at last month’s release, which had been a textbook case of how NFP is traded.

First of, heading into the release the ADP report had significantly missed expectations (330k vs 695k exp.), which in turn, lowered the bar for the NFP report to surprise on the upside. Couple this with surprisingly hawkish comments from Vice Chair Clarida, this had heightened the market sensitivity to the NFP report.

That in mind, when laying out the potential scenario’s, my view had been that should we see a strong headline and details, the USD would be expected to perform well vs CHF and NZD.

Upon release of the NFP report, which had been a very strong reading both in terms of the headline and details.

NZD/USD immediately blipped lower, before retracing back to pre-announced levels, until which by the time the dust settled and market participants digested the report, the NZD/USD then began to make a sustained move lower. As such, it is worth highlighting that the immediate blip lower is likely caused by algos/HFTs, therefore, jumping on this move would likely result in a poor entry. In turn, as a retail trader with higher latency, it is best to wait for the dust to settle. 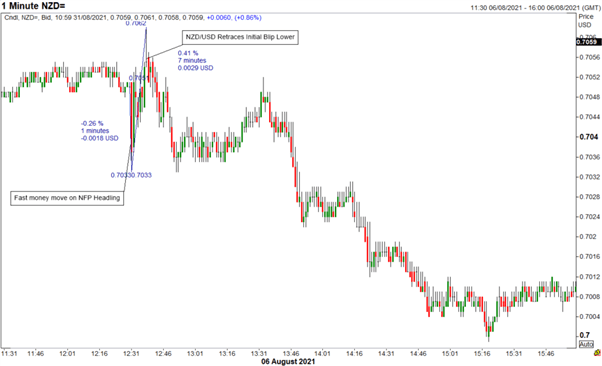