It’s been a fast start for a Friday and prices in many markets remain on the move as of this writing. With the Jackson Hole Economic Symposium taking place, there’s a litany of macro drivers and this morning showed that on full display.

Comments from James Bullard and Loretta Mester ahead of Jerome Powell’s scheduled speech at 10 AM ET brought upon a move of strength in the USD, as both talked up the prospect of a near-term start to taper. Bullard continued to remain very hawkish while Mester made it a point to separate the rate hike theme from the taper discussion, adding a bit of balance to the mix ahead of Jerome Powell.

Powell, however, continued to sound dovish. He said that the ‘signficant further progress’ that the Fed was looking for has been met on inflation: But not quite yet on employment. But he indicated that if the next upcoming jobs reports remain strong, that bar may be met and the Fed may be in a position to taper asset purchases by the end of this year, which is starting to put more and more focus on the December FOMC rate decision for some type of formal announcement.

The immediate reaction, which actually started about 12 minutes before Powell started speaking, was one of notable USD weakness. The US Dollar had been bid for the early part of the morning, owed in part to the Bullard and Mester comments. But that bid soon evaporated as Powell’s speech neared, and when he began to talk, the Dollar plummeted to and then through a big spot of support at 92.80-92.90. 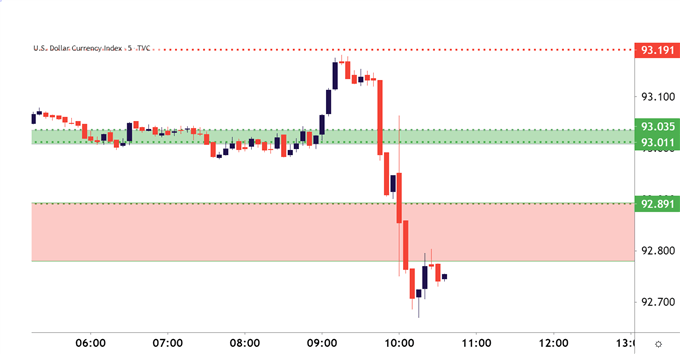 Perhaps the area of the market most interesting in this type of announcement are equity markets. US stocks dipped yesterday ahead of Powell’s speech this morning, with the S&P 500 touching a spot of support that I had looked at earlier in the week.

That level helped to mark the low and with Powell’s dovish take this morning, the S&P 500 jumped up to another fresh all-time-high, temporarily trading above the 4500 level for the first time ever.

The Nasdaq 100 has been very rate sensitive of late, showing pressure on the prospect of higher rates but flying higher when the Fed inevitably feeds the market with dovishness. That continued again this morning, with the Nasdaq 100 pushing up to yet another fresh all-time-high before pulling back after the Powell speech had ended.

This remains of interest as there’s now a foreseeable pathway for the Fed to actually beginning to push policy in a less loose direction. If the September NFP report comes out above expectations, which are already fairly high, this could compel a pullback if not more in some of these higher-beta risk-on types of markets.

A strong NFP read next week can lead to a more hawkish Fed at the September FOMC rate decision; and given that July saw ‘most participants’ ready for a 2021 start to taper, then logically we’ll hear more details about that at the FOMC meeting, keeping December on track for a more formal announcement or, perhaps even a start to tapering of asset purchases.