After a few tough weeks for oil, prices have lifted up nicely this week as demand optimism has improved with the approval of a Covid-19 vaccine in the US and a production outage in Mexico. Oil output in the Gulf of Mexico has been cut by 25% since Sunday as a fire broke out at one of state-run producer Pemex’s

offshore platforms. Experts have said it could take weeks to restore normal production which is keeping oil prices supported in the short term.

US Crude Oil has jumped over 11% since the open on Sunday night, which marks its best weekly performance since March. Bulls took a breather in Thursday’s session as many traders were likely cashing in the profits from the surge, but momentum has once again picked up on the upside on Friday as the price of a barrel sits just above 68 dollars.

Buyers are likely targeting a price above 70 dollars per barrel over the coming days but there are still some grey clouds threatening to dampen sentiment even further as Covid-19 becomes an important focal point for markets once again. With restrictions having been put back in place in China a few weeks ago, we saw Australia and New Zealand follow suit as the new Delta variant proves to be more infectious, causing cases to rise significantly once again. And the US is no exception, with new daily cases having risen by the highest number this week since the peak back in January, which is causing concern about possible new travel restrictions in the country, a big blow for the demand for crude oil. 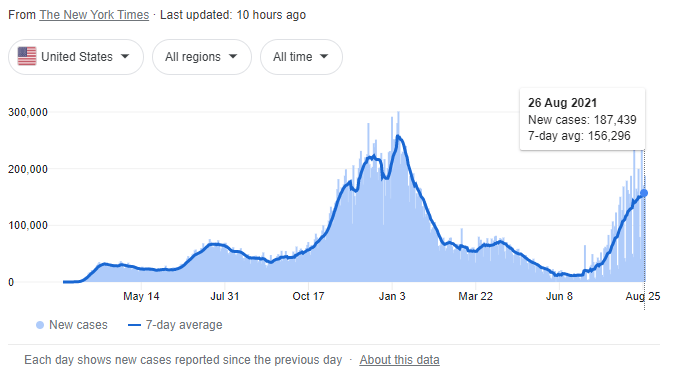 Despite the strong bullish momentum built up over the last few trading sessions, the strength in the rise is starting to falter as price stagnates just below the 100-day moving average. As mentioned above, this is likely to do with some profit-taking along the way but there are some fundamental risks to be aware of which are likely limiting the number of new buyers being attracted to crude at these levels, meaning we could see some consolidation, or even a pullback, before bullish momentum gathers again. If so, the area between 61.68 and 60.60 is a good place to look for support, followed by 57.36.