Bitcoin (BTC/USD) and Ether (ETH/USD) have surrendered a portion of their recent gains from the recent rally over the weekend but remain well within range to test higher historical highs.

Given the fundamental and historical backdrop, price action has remained skeptical of further upside potential, at least for now.

As talks of climate and inflationary controls take center stage, the race for Blockchain confluency and adaptability may be the catalyst for transformation.

With Japanese regulators recently approving ADA/USD to be listed on exchanges, the US economic backdrop remains a catalyst for further progression.

Although these 'alt coins' represent a portion of the move of the 'grandfather' and founder of the trillion dollar industry, the future technology has opened gateways of technological advances to banking and finance as we know it. However, as technological advances continue to gain traction, speculation and regulations have remained the dominant catalysts for further gains.

Currently, Bitcoin (BTC/USD) continues to test the key psychological level of $45,000, despite a break above this level in recent trading sessions. The recent NFP data and the announcement of the Defi regulatory changes weighing on other major cryptocurrency, Bitcoin, Ethereum and many alt coins were amongst the leaders of the recent rally that has driven the For now, BTC/USD has risen back above prior resistance with ETH following in close proximity. As tapering lurks on the horizon, further clarity regarding the association between crypto and new regulations remains vague but has kept the industry on high alert and in positive territory, at least for the time being.

After Numerous days of gains, Bitcoin (BTC/USD) bulls ran into a wall of resistance at $45.000. With regulatory concerns still underway, further developments in price action may unfoldfor the foreseeable future.

With Japanese regulators recently approving Cardano (ADA/USD) to be listed on exchanges, the US economic backdrop remains the key catalyst for further moves (at least for now)

As depicted by the EMA, Eth is heading in a positive direction provided it can sustain the positive growth expectations expected from counterparts. 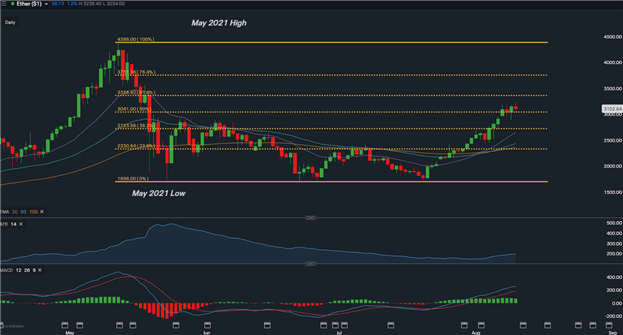