The Dow Jones Industrial Average pulled back from all-time highs on Monday as investors mulled rising Delta variant cases around the world and a possible faster pace of Fed tapering stimulus. Much stronger-than-expected July nonfarm payrolls data pointed to a resilient US labor market despite a viral resurgence, hinting that the conditions are gradually maturing for Fed officials to start a debate on a tapering schedule. The abrupt plunge in gold prices during Monday’s Asia-Pacific hours may have reflected this prospect.

In China, millions of people have been undergoing Covid tests as travel restrictions were imposed in many cities the country attempt to fight against a new wave of viral flareups caused by the highly-contagious Delta variant. Some 125 new confirmed infections were reported on Sunday, with the majority found in the central city of Zhengzhou and the eastern city of Yangzhou. Efforts to stem the spread of the virus may hint at slower economic activity and softer energy demand in the months to come. 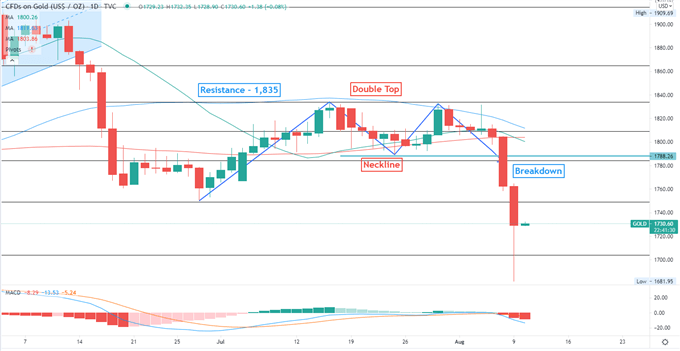 Asia-Pacific markets are positioned for a positive start to the day. Futures in Japan, mainland China, Australia, Hong Kong, Taiwan, Singapore, Malaysia and Thailand are in the green, whereas those in South Korea and India are slightly lower.

Hong Kong’s Hang Seng Index (HSI) climbed 0.40% on Monday, lifted by Tencent (+1.76%) and HSBC (+1.39%). Alibaba fell 2.48% after one of its managers was investigated for sexually assaulting a female employee. The stock connections registered HK$ 3.45 billion of net Southbound inflows on Monday (chart below), reflecting that more mainland buyers are returning to Hong Kong’s market for bargain hunting. Lingering regulatory risks, however, may still be at the top of investors’ mind. 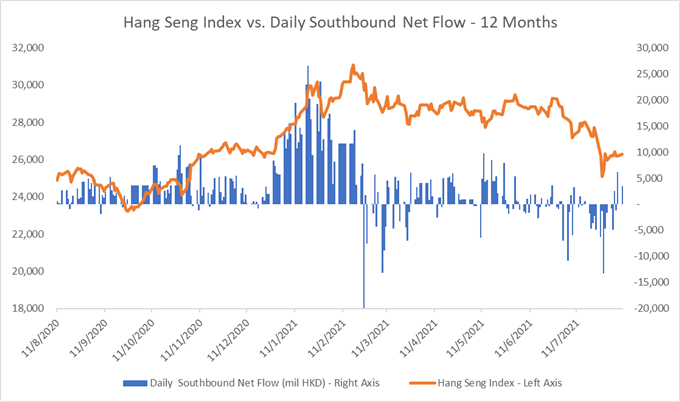 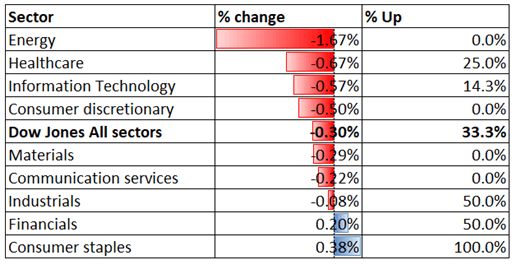 The Dow Jones index breached above a key resistance level at 34,920, thus opening the door for further gains. Prices remain in an “Ascending Channel”, as highlighted on the chart below, suggesting that the overall trend remains tilted to the upside. Bearish MACD divergence suggests that upward momentum may be weakening however. 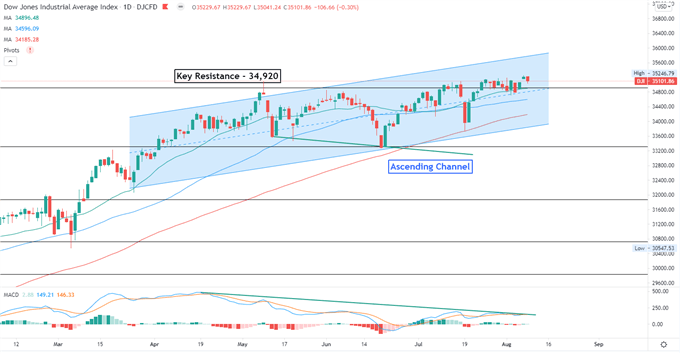 The Hang Seng Index entered a range bound condition after falling sharply at the end of July. The near-term trend has likely turned positive after the MACD indicator formed a bullish crossover. A successful breach above the immediate resistance level at 26,650 may signal further upsides, whereas a break below 25,750 support may result in the reverse. 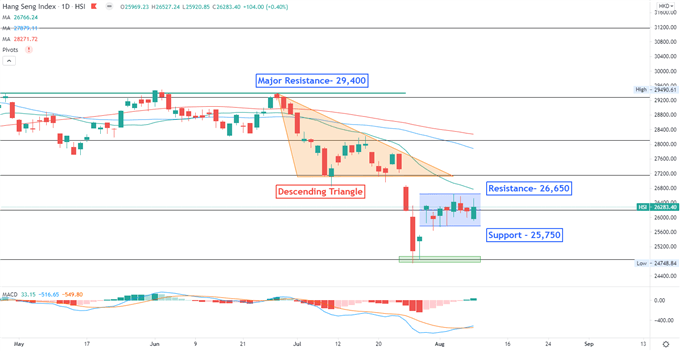 The ASX 200 index has breached above a key resistance level at 7,500 – the 200% Fibonacci extension. The overall trend remains bullish-biased, as suggested by the consecutive higher highs and higher lows formed over the past few months. The MACD indicator formed a bullish crossover and trended higher, suggesting that upward momentum is gaining traction. 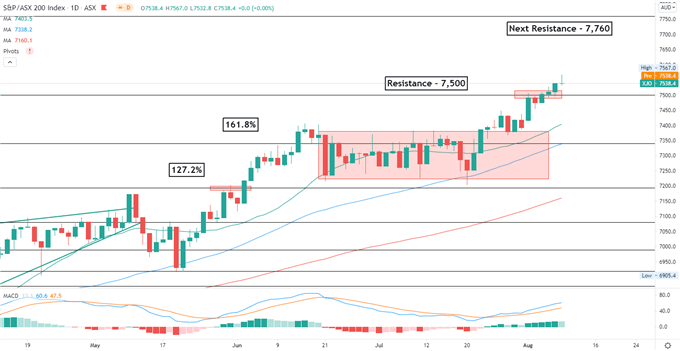