On Thursday evening around 21:00 local time, President Cyril Ramaphosa announced changes to numerous departments within his cabinet. While the reshuffle may have already been on the cards, the communication breakdown between the intelligence ministry and the SA Police during the recent civil unrest highlighted the need for more immediate changes.

Cabinet reshuffles are not unusual in the South African political landscape with former president Jacob Zuma having done so during his tenure, albeit, controversially.

Apart from the change in the ministry of finance the most surprising revelation from last night was to dissolve the ministry of intelligence and have the State Security Agency (SSA) report directly to the office of the president, instead.

Last night also saw the resignation of finance minister Tito Mboweni who was replaced by the chairperson of the ruling party’s economic committee, Enoch Godongwana.

During the president’s address the USD/ZAR pair moved over 3.700 pips within an hour as prices spiked to 14.7480 only to fall back towards the 14.50 level where it has oscillated since.

USD/ZAR is however trading higher than levels witnessed in the lead up to the announcement but remains vulnerable to bouts of volatility as we head into the NFP data release. 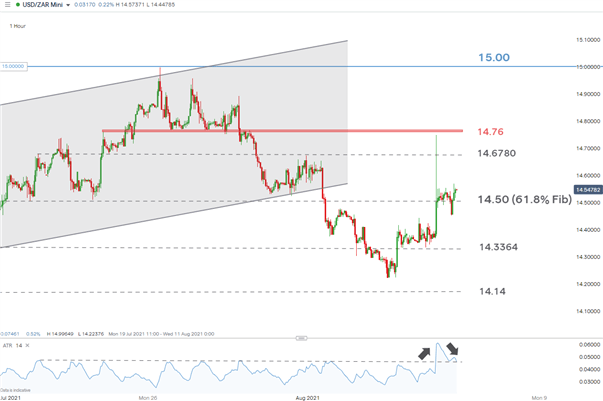 The daily chart below, highlights the emergence of what appears to be a morning star candle – an indicator of a potential bullish reversal. Adding to a slightly bullish narrative is the MACD trading above the zero line as the pair looks to continue the longer-term uptrend since marking the 2019 low. However, trendline resistance continues to hold after yesterday’s spike ran out of steam. 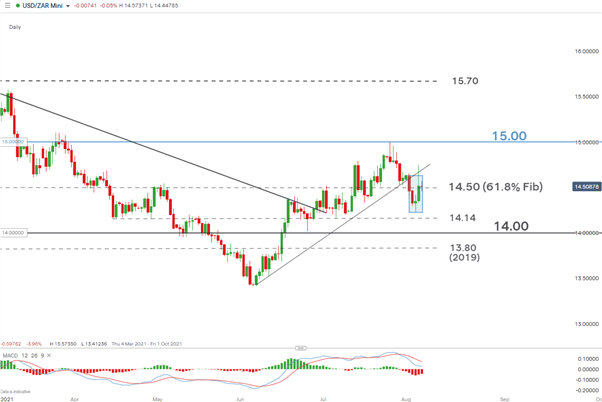 US Non-Farm Payrolls Hot on the Agenda

The US economy is expected to report an increase of 870,00 jobs for the month of July, the fastest pace of job growth in the last seven months. The reopening of the US economy and significant progress in Covid-19 vaccinations has prompted businesses to employ more staff to meet the higher demand. This is all despite growing numbers of infections being reported across the country.

The Fed has made it clear that it is committed to its dual mandate of price stability and maximum sustainable employment. Thus far it has been the labor market that has stayed the tapering hand of the Fed as the committee looks for ‘substantial progress’ in the jobs market.

A positive jobs print could see a slight lift in the value of the dollar (and USD/ZAR) as talk of the tapering timeline comes closer. The jobs number will definitely be a talking point going into the Jackson Hole Economic Symposium later this month and the September FOMC meeting.