The Nasdaq 100 is trading on its front foot this morning. Nasdaq price action was up around 0.5% at the opening bell in New York with the Dow Jones and S&P 500 following in stride. The positive tone to kick off August trade is accompanied by overall solid economic data just released. As detailed on the DailyFX Economic Calendar, ISM Manufacturing activity crossed the wires at 59.5 for July and indicates the 14th consecutive month of growth in the US manufacturing sector.

This figure did disappoint relative to the consensus forecast, however, with markets expecting 61.0 for the headline PMI. Looking under the hood of the latest ISM Manufacturing PMI report highlights a strong improvement in the employment subcomponent to 52.9 from 49.9 in June. The prices paid subcomponent dropping sharply from 92.1 to 85.7 is also noteworthy. 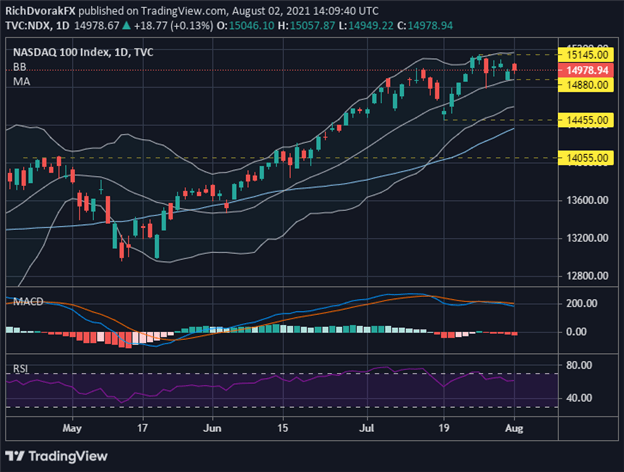 Stocks seemed to pull back slightly from their gaps higher at the open as markets digested details of the latest manufacturing report. The Nasdaq continued to trade in positive territory, but the strong reading on employment might have briefly weighed negatively on risk appetite. Albeit counterintuitive, signs of the labor market improving could create headwinds for stocks because of its likelihood to keep pressure on FOMC officials to deliver a timeline for tapering asset purchases. That said, the drop in the prices paid index does give credibility to the Fed’s transitory narrative and patiently accommodative stance.

Nasdaq price action nevertheless appears likely to continue trading strong with technical support around 14,880 providing a nice degree of buoyancy. This level is underpinned by last Friday’s intraday low as well as the 20-day simple moving average. The Nasdaq faces resistance around all-time highs and its upper Bollinger Band, though. Breaching support near the 14,880-price level could see the Nasdaq extend lower toward its July swing low before prior resistance-turned-support support around 14,055 comes into focus. Aside from shifts in risk appetite around the delta variant of covid, markets will likely have the upcoming release of ISM Services PMI and nonfarm payrolls data due later this week at the top of their radars.