NZD/USD is bouncing back up towards 0.70 once again after last night’s Federal Reserve meeting left investors wanting more. The initial announcement seemed to suggest that the central bank was taking a hawkish tilt as it suggested that the economic environment was looking more favorable to start tapering asset purchases, but Powell’s presser served to tame any overenthusiasm as he stressed that the US economy has not made enough progress for the bank to cut back its support for the economy.

The general feeling is that the bank is moving in the right direction and has now begun the countdown towards its tapering plan, but there is still some leeway for the Fed to keep its ultra-loose monetary policy agenda before the market starts throwing a tantrum again, or so the bond market suggests. This view is likely going to create a bigger divergence between the Fed and other central banks that have already set a path for adjusting their policies accordingly.

One of the main standouts is the Reserve Bank of New Zealand, which surprised markets at its meeting this month when it announced it was ready to start scaling back bond purchases. The policy committee concluded that the significant risks to the economy – deflation and high unemployment – have subsided and that an overheating economy and high inflation were becoming one of the main worries.

This noted a change in the bank’s behavior and markets were quick to adjust their expectations about a possible rate hike by the end of the year, with money markets now pricing in a 93% chance of a hike in November, with the probability of an August hike up to 56%. 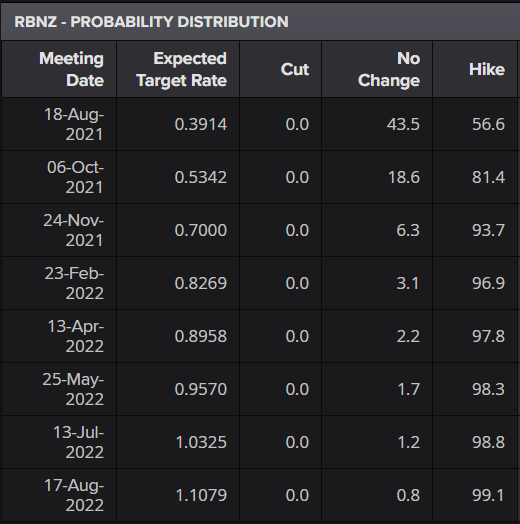 The thing is that the Kiwi has been slow to react to this increased hawkishness from the RBNZ with NZD/USD having been stuck in a range for the past 5 weeks following a 5% fall back at the beginning of June. The US Dollar has been picking up some risk-off demand over the last few weeks which has seen the pair test the lower bounds of a support area on a few occasions but has been unable to break below 0.6880. This bounce off its support may have served to build bullish momentum as NZD/USD is now attempting to break higher but will need to overcome the 0.70 line before it consolidates further gains, something that has proven a little tricky in the last few sessions. Above this area, the 50-DMA is likely to be another area of short-term resistance at 0.7043 before the pair can focus on getting back above 0.71.