Meme Stocks: What Are They and Why Are They so Popular?

Meme stocks are shares that tend to rise exponentially after going ‘viral’ on social media platforms or online forums often without any justification provided by the fundamental value of the share itself. The targeted stocks tend to be ‘underdogs’ or companies that are heavily shorted by large institutions - mainly hedge funds but also include new tech or pharma stocks with great perceived potential.

Popularity of these stocks increase as online users post and share messages encouraging the mass purchase of these stocks, often in a humorous fashion, incorporating the latest memes to do so. A meme can be described as an image, video or piece of text which is humorous in nature, that is copied and spread rapidly by internet users, often with subtle variations. 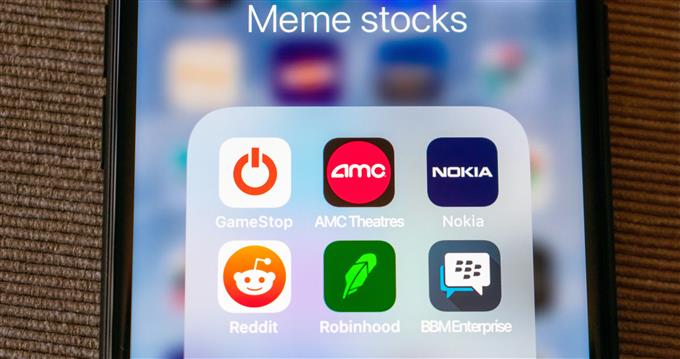 Meme stocks include but are not limited to the following:

Meme stocks have many drivers, however there are a number of more prominent factors that affect meme stock prices which are listed below:

Online forums such as Reddit, via the subreddit called ‘WallStreetBets’ and Twitter have proven to be an effective way for meme stock enthusiasts to advocate for the purchase of particular shares. It must be noted that while Twitter and Reddit have guidelines regarding the use of their platforms, information provided on such platforms will need to be verified as users have the freedom to post just about anything.

Under normal market conditions, setting up an online trading account is fairly straightforward and can be set up in next to no time. In October of 2019, online brokerage Charles Schwab announced that it would offer zero commission stock trading, creating a domino effect as numerous other players followed suit. All this means that buying and selling stocks has become easier for the individual investor.

Meme stocks tend to vary drastically across industries and include:

Meme stocks, particularly Gamestop (GME), can have relatively low numbers of shares in issue but more specifically, a low free float (number of shares that can be actively traded), when compared to mainstream stocks like Apple or Bank of America for example. This scarcity enables faster price appreciation as there are only so many shares available to be traded at any point in time. Once the movement takes off and buyers pile into the stock, more and more people get FOMO and rush to buy the stock even at seriously elevated levels.

The rise of meme stocks also highlighted the practice of short-selling stocks, which is a process where a speculator or institution bets against a particular company and expects the share price to drop in the future. While it’s not illegal, short selling has been viewed as unethical as Wall Street firms have benefitted from this practice to the detriment of individual investors who invested in share portfolios or retirement funds. The online community identified Gamestop as the perfect stock to retaliate against the ‘big boys’ by orchestrating a short squeeze – more on this later.

Adding to the frenzy was tech entrepreneur, Elon Musk who has been known to enjoy memes and finds the time to tweet regularly despite his busy schedule. Musk has a large following among the Reddit and Twitter community with each tweet reaching a vast audience. After changing his Twitter bio to ‘#bitcoin’ the cryptocurrency rallied over 20% and after tweeting ‘Gamestonk!’ alongside a link to the WallStreetBets subreddit page, the share climbed 150%. Input from large public figures only serves to further promote they hype around meme stocks.

The most notable meme stock has to be the above-mentioned Gamestop (GME), a video game and consumer electronics retailer, which surfaced as the perfect stock for the online community to hit back at Wall Street.

They did this by collectively contributing to a short squeeze, which occurs when investors bet against a stock (short the stock) but an influx of buyers forced the stock price higher and higher causing short sellers to have to buy those same stocks at a higher price than they already sold them for.

The effects of this can be seen in the below GME chart: 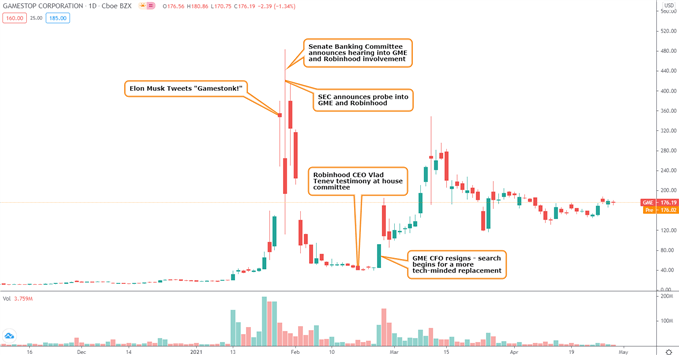 At the time the Gamestop short squeeze was in play, the online community identified a number of other heavily shorted stocks to purchase. The momentum behind GME’s price rally flowed into these other stocks and therefore, price action began to look a lot like that of Gamestop.

It is clear to see that there is a significant surge in price followed by an almost immediate drop-off before interest is re-ignited once more (sometimes through news regarding the company) that brings buyers back to the table. After the dust has settled price actions has, in these examples, flattened out somewhat but remains above levels witnessed prior to the mania.

Massive daily price swings create significant volatility, which brings about opportunity but also the potential for disaster. Trading is halted on public exchanges when shares experience such drastic moves which makes it difficult or impossible to exit positions at current price levels. Brokerages have also taken decisions to halt trading of these meme stocks on their platforms citing increased clearing firm charges.

So, meme stocks may have benefitted a number of individuals at the very start of the whole process but there still remains an extremely elevated level of risk when getting involved in meme stock trading as trading may be halted at the exchange’s/broker’s discretion. Furthermore, extreme price swings may wipe out all or most of your investable capital with very little warning.